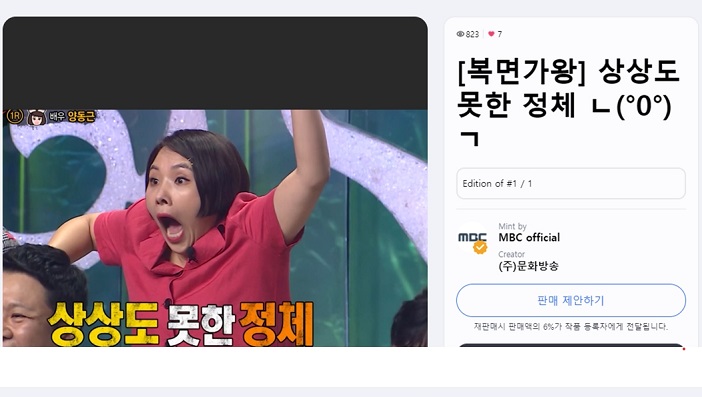 This photo provided by South Korean terrestrial network MBC shows an NFT of a video clip on the reaction by comedian Shin Bong-seon.

SEOUL, Jan. 6 (Korea Bizwire) — A variety of video clips from MBC’s popular variety shows and dramas that have been used in memes online have been auctioned off at higher than expected prices through sales of non-fungible tokens (NFTs).

The major terrestrial network said Wednesday the NFT of a video clip on the ‘unimaginable identity’ reaction by comedian Shin Bong-seon, a member of the panel for its singing competition show “King of Mask Singer,” was sold for a price of 3 million won (US$2,500).

In the video clip, Shin looked on open-mouthed with her arms lifted in opposite directions when the identity of a singer was unveiled.

Her reaction went viral with the caption titled ‘unimaginable identity’ and was picked as the best meme of the year 2021 on some online communities.

In addition, an NFT of a video clip from 1994 horror drama “M” starring Shim Eun-ha was sold for a price of 4.5 million won.

MBC launched its NFT business in July last year and has created a variety of NFTs using historic moments in broadcasting.

The proceeds from the auctions have thus far been donated to the Community Chest of Korea, a South Korean charity group.