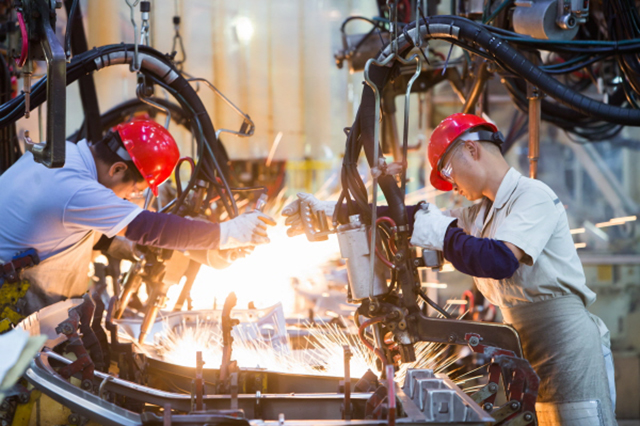 From 2007 to 2014, the labor costs of local automakers including wages and other benefits increased 6.6 percent annually. In comparison, labor costs in other countries including Germany, the United States, Japan and France stood at -0.4 percent, 0.1 percent, -6.6 percent and -4.1 percent respectively. (image: Hyundai Motor Group)

SEOUL, Aug. 31 (Korea Bizwire) – “Labor costs in Korea are rising rapidly. For example, Indian assembly plants can produce cars at half the cost of those in Korea. The so-called ‘ordinary wage’ issue will affect all Korean industries – not just the automobile industry.”

Last May, Sergio Rocha, president and CEO of GM Korea, a local unit of General Motors, warned about rising wages in the Korean automotive industry. Recently, wage hikes have once again become the talk of town. This time it was Lee Ki-kwon, minister of Employment and Labor, who broached the topic.

“The average annual salary at Hyundai and Kia Motors is between 94 million won and 97 million won (US$79,470 and US$82,000). Compared to the gross national income per capita, their salary is 3.3 times higher, while that of Toyota is only 1.7 times higher,” Minister Lee said.

Lee pointed out that such high wages and low productivity hold back the competitiveness of Korean automakers.

According to a statement from the Korea Automobile Manufacturers Association (KAMA) on August 30, the average annual salary of the five automakers in Korea reached 92.34 million won (US$78,000) last year, slightly higher than German rival Volkswagen’s 90.62 million won.

In addition, wages are higher than those of Toyota, where workers made an average of 83.51 million won (8.56 million yen), estimated based on its business report. However, industry officials expect that total wages at Toyota could be higher as its business report does not include incentives.

When we put these statistics together, it easy to conclude that Korean automakers offer similar or higher wages to its workers compared to foreign automakers, even though they produce less value-added products.

From 2007 to 2014, the labor costs of local automakers including wages and other benefits increased 6.6 percent annually. In comparison, labor costs in other countries including Germany, the United States, Japan and France stood at -0.4 percent, 0.1 percent, -6.6 percent and -4.1 percent respectively.

Exports of Korean-made vehicles decreased five months in a row this year before recovering in June. However, they fell again in July due to the devaluation of the yen and the Euro, which weakened the price competitiveness of Korean vehicles.

An official at KAMA said, “The falling flexibility of wages and employment could cause weakening competitiveness, which will diminish domestic production and employment. Korean automakers need to raise their flexibility by adjusting production volume according to changes in the market, and change their wage systems to performance-based systems.”