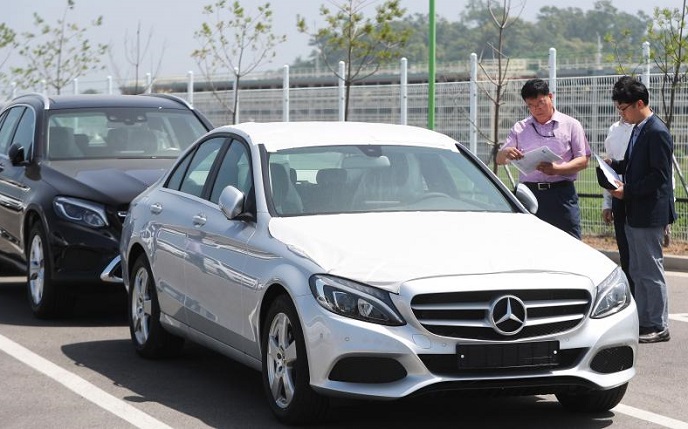 This file photo, taken on June 21, 2018, shows South Korean government officials checking a Mercedes-Benz car for a probe into alleged emissions rigging in the city of Hwaseong, Gyeonggi Province. (Yonhap)

Mercedes-Benz was found to have tampered with pollution mitigation devices by installing illegal software in its cars, which made them perform at lower levels in ordinary driving conditions than during certification tests, according to the Fair Trade Commission (FTC).

The rigging means that the vehicles failed to meet permissible emission levels, but the German automaker falsified related facts in signs attached to its cars between April 2012 and November 2018, according to the commission.

The Korean unit also advertised that the vehicles’ nitrogen oxide emissions remained at a minimum level and they fully met the Euro 6 emission standards.

Such false ads were on a total of 15 models, and they had run on its catalog, magazines and press releases between August 2013 and December 2016, according to the commission.

“Though Mercedes-Benz claimed that it only used typical phrases about well-known performances of the emission mitigation devices, concealing the intentional implementation of illegal software and claiming its vehicles perform the best are beyond simple exaggeration and deception,” the regulator said in a release.

“Such practices will or are feared to hurt fair market order by preventing consumers from making a reasonable decision,” it added.