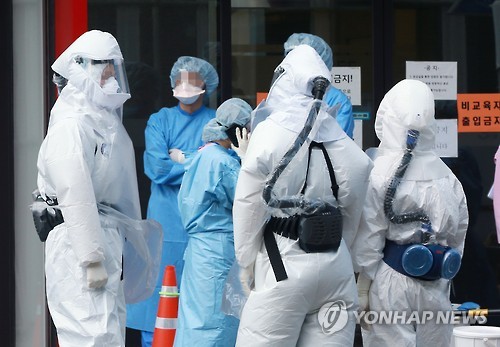 MERS has claimed 33 lives and infected nearly 190 people since its outbreak on May 20 in South Korea, sparking concerns that it could further dampen consumer spending and hamper the recovery of Asia’s fourth-largest economy. (image: Yonhap)

The combined third-quarter operating profit of 117 listed firms on the main bourse was estimated at 29 trillion won (US$25.8 billion) as of Friday, down 6.36 percent from 30.9 trillion won predicted at the end of May, when the first case of MERS was reported in the country, according to the data compiled by local financial information provider FnGuide.

Their second-quarter earnings forecast was also revised down 2.71 percent to 27.7 trillion won from 28.4 trillion won over the cited period, the data showed.

MERS has claimed 33 lives and infected nearly 190 people since its outbreak on May 20 in South Korea, sparking concerns that it could further dampen consumer spending and hamper the recovery of Asia’s fourth-largest economy.

Tourism-related sectors were hit hardest by the epidemic due to a decrease in the number of foreign visitors, especially from China. Data by the state-run tourism agency showed that more than 120,000 foreigners have canceled their visits since the MERS outbreak.

Hotel and leisure companies were projected to see their second- and third-quarter earnings outlooks sink 12.08 percent and 12.42 percent, respectively, over the same period.

“MERS started to affect the South Korean economy in mid-June, and companies will feel the pinch most in the third quarter,” said Kim Hyung-ryeol, a senior analyst at Kyobo Securities. “Some sectors that highly depend on Chinese demand are expected to underperform in the coming months.”

Last week, the Seoul government unveiled a plan for an around 12 trillion-won extra budget to boost sluggish consumption and revitalize the economy.