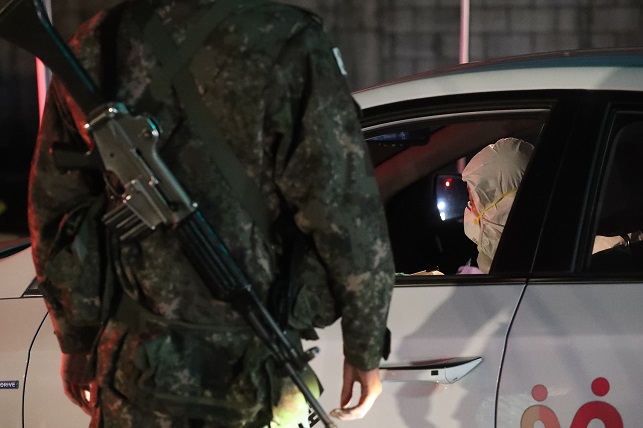 Health authorities enter an Army boot camp in the northern county of Yeoncheon on Nov. 25, 2020, after dozens of newly enlisted soldiers tested positive for the new coronavirus. (Yonhap)

SEOUL, Nov. 27 (Korea Bizwire) — The military began enforcing a tighter social distancing scheme on Friday banning troops from vacationing and taking off-installation trips as it is striving to stem the spread of the new coronavirus at barracks.

Under the Level 2.5 social distancing guidance at barracks, all service members are not allowed to leave their bases for the next two weeks.

Officers are restricted from having private meetings, while in-person religious gatherings and business trips are also banned.

As for drills, necessary outdoor trainings will be conducted in a way to minimize contact with civilians, while indoor programs are to be limited, according to the defense ministry.

It is far tougher than the current nationwide social distancing level, as the government has enforced Level 2 rules in the greater Seoul area since earlier this week, and most other regions are at lower levels.

South Korea has a five-tier social distancing system from Level 1 to 3.

The stronger rules for service members came as the worst ever cluster infection among the military population broke out this week.

Since Wednesday, 66 newly enlisted soldiers and four officers have been confirmed to have been infected with COVID-19 at an Army boot camp in the central border town of Yeoncheon.

Virus tests for those at the camp and those who came into contact with them are still under way, according to a ministry official.

The total number of infections reported among the military population came to 342 as of Thursday, according to the defense ministry. The figure has grown sharply since mid-November. 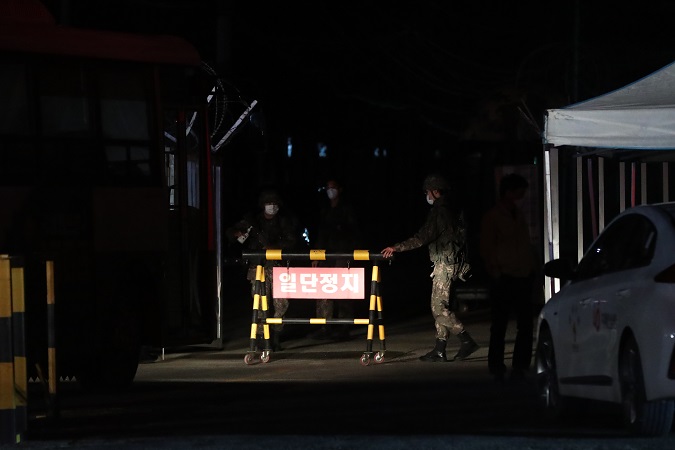 Soldiers open the front gate of an Army boot camp in the northern county of Yeoncheon on Nov. 25, 2020, to allow the entry of health authorities after dozens of newly enlisted soldiers tested positive for the new coronavirus. (Yonhap)

On Friday, the military reported five additional COVID-19 patients among its population.

Three Army officers stationed in the southwestern city of Iksan tested positive after coming into contact with two of their colleagues who earlier were confirmed to have been infected.

One soldier in the border town of Cheorwon showed symptoms and tested positive following a recent cluster infection there involving nearly 40 service members.

The other case is a civilian officer at an Air Force base in the central city of Seosan. The total number of patients at the unit now stands at 16, according to the ministry.

The latest cases brought the total number of infections reported among the military population to 347, according to the defense ministry. The figure has grown sharply since mid-November.

Nationwide, the country added 569 more COVID-19 cases, including 525 local infections, raising the total caseload to 32,887, according to the Korea Disease Control and Prevention Agency (KDCA).