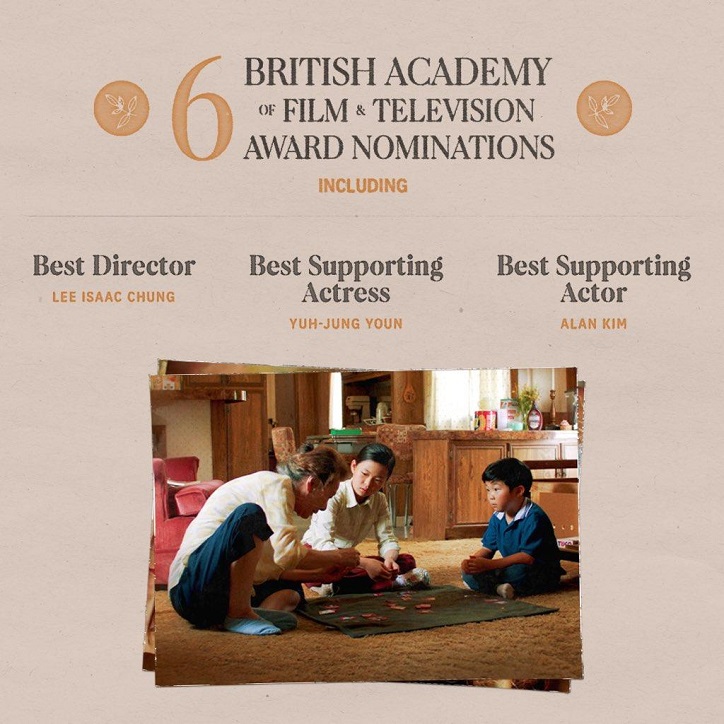 This image from the Twitter account of “Minari” highlights the film’s six nominations for the BAFTA awards. (Yonhap)

SEOUL, March 10 (Korea Bizwire) — “Minari,” a drama film about a Korean-American immigrant family, has been nominated in six categories at the British Academy of Film and Television Arts (BAFTA) awards.

It is just one nod shy of “Nomadland” and “Rocks,” which lead the BAFTA competition with seven nominations each.

Director Chung, who made the film based on his childhood memory, will compete for the best director prize with directors Thomas Vinterberg of “Another Round,” Shannon Murphy of “Babyteeth,” Chloe Zhao of “Nomadland,” Jasmila Zbanic of “Quo Vadis, Aida?” and Sarah Gavron of “Rocks.”

In the best non-English language film category, “Minari,” in which most of dialogue is in Korean, will contend with Denmark’s “Another Round,” Russia’s “Dear Comrades!” France’s “Les Miserables” and Bosnia’s “Quo Vadis, Aida?”

Moreover, two of its actors scored BAFTA nods for acting.

South Korea’s veteran actress Youn Yuh-jung, who took a role of the livewire grandmother Soonja in “Minari,” will vie for her first BAFTA acting title with Maria Bakalova fo “Borat Subsequent Moviefilm,” Dominique Fishback for “Judas and the Black Messiah,” Ashley Madekwe for “County Lines,” Niamh Algar for “Calm With Horses” and Kosar Ali for “Rocks.”

Eight-year-old Alan Kim, who portrays the 7-year-old grandson David, known to be the stand-in for director Chung, is among six candidates for best supporting actor, including Daniel Kaluuya for “Judas and the Black Messiah,” Leslie Odom Jr. for “One Night In Miami,” Clarke Peters for “Da 5 Bloods” and Paul Raci for “Sound of Metal.” 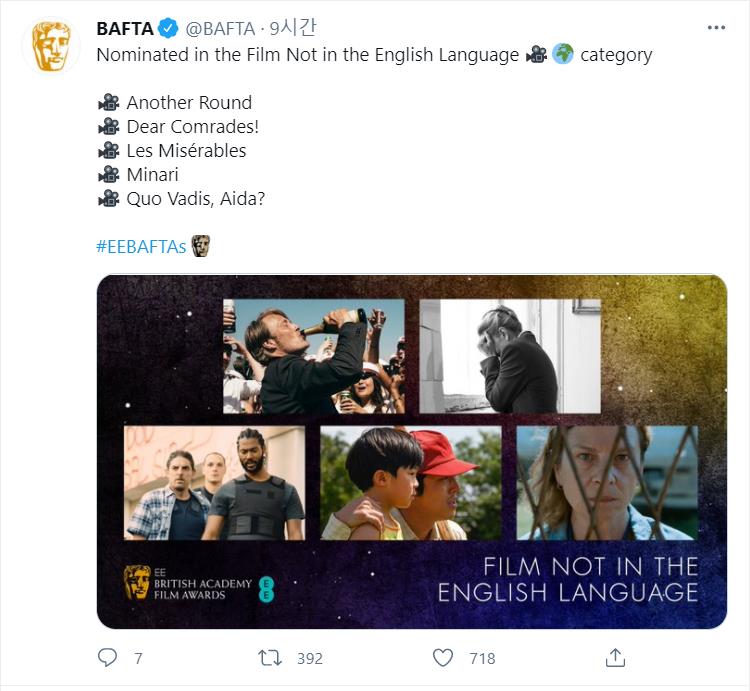 This image from the Twitter account of BAFTA shows the nominees for the Film Not in the English Language. (Yonhap)

The 2021 BAFTA Film Awards is scheduled to take place April 11.

He will compete for outstanding directorial achievement in theatrical feature film with Chloe Zhao of “Nomadland,” Emerald Fennell of “Promising Young Woman,” David Fincher of “Mank” and Aaron Sorkin of “The Trial of the Chicago 7.”

The DGA award is one of the leading precursors to the upcoming Academy Awards along with the awards of two other film trades, the Producers Guild of America (PGA) and Screen Actors Guild (SAG), both of which have already given nods to “Minari.”

Since making a successful debut at the Sundance Film Festival early last year, “Minari” has become one of the most critically acclaimed movies of the Oscar circuit, earning a number of titles and nominations from film critics circles and awards.

It recently won best foreign language film at both the Golden Globe Awards and the Critics Choice Awards.