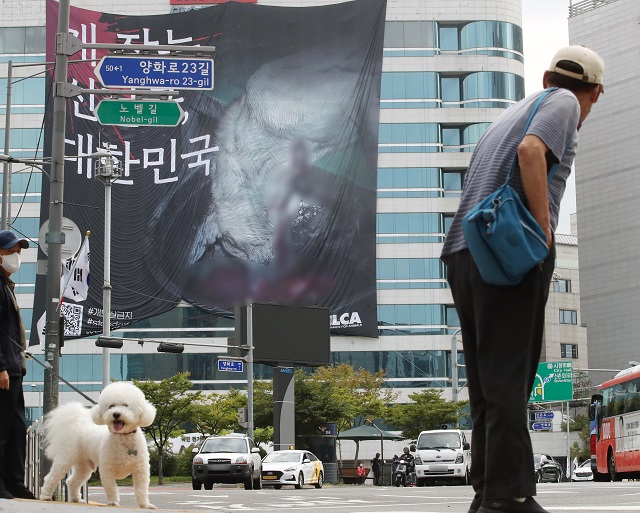 This Oct. 5, 2021, file photo shows a banner calling for a ban on dog meat consumption put up at a building in western Seoul. (Yonhap)

Chung expressed his position on the long-standing controversy in his written answer to a lawmaker’s question ahead of his confirmation hearing scheduled for Friday.

“As the number of families with pets has increased and public interest in animal welfare has grown, banning dog meat is the direction in which our society should move forward,” Chung said.

The veteran bureaucrat was nominated by President-elect Yoon Suk-yeol in mid-April to head the Ministry of Agriculture, Food and Rural Affairs.

The nominee noted the problem has been so contentious for a long time that a broad social consensus is needed to resolve it.

“I will make efforts to achieve a grand compromise to end dog meat consumption by fully listening to and coordinating opinions of the industry and animal rights groups,” he added.

A government-civilian consultative body was launched in December to deal with the issue.

If the 21-member task force comes up with compromise policy recommendations, the incoming government will take measures to deliver them, including related law revisions, he said.

A survey conducted by Realmeter in November showed 48.9 percent of the respondents were opposed to outlawing dog meat, while 38.6 percent supported it.

During his election campaign, Yoon expressed his opposition to eating and trading dog meat but said banning the centuries-old practice by law requires a social consensus.