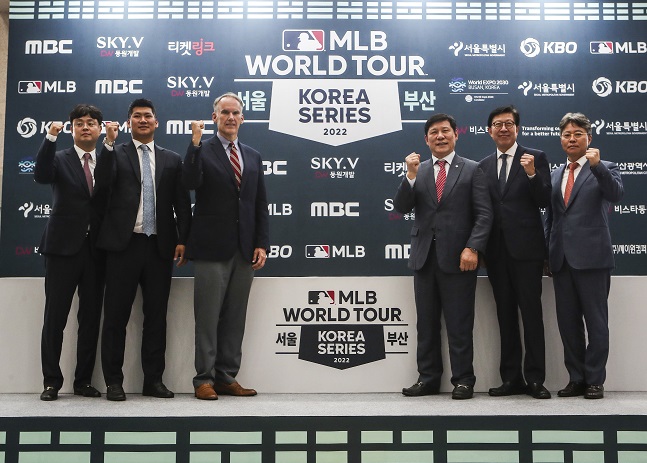 In this file photo from Sept. 19, 2022, Jim Small (3rd from L), Major League Baseball’s senior vice president for international operations, and Heo Koo-youn (3rd from R), commissioner of the Korea Baseball Organization, pose for photos with other participants of the press conference for MLB World Tour’s Korea Series at Busan City Hall in Busan, 325 kilometers southeast of Seoul. (Yonhap)

MLB made the announcement while Game 1 of the World Series between the Philadelphia Phillies and the Houston Astros was under way in Houston on Friday (local time).

The MLB World Tour Korea Series was to have featured two games in the southeastern city of Busan on Nov. 11 and 12 and two more in Seoul on Nov. 14 and 15.

A team of MLB players, including a few South Korean-born players such as Kim Ha-seong of the San Diego Padres and former World Series MVP Salvador Perez, was set to take on Korea Baseball Organization (KBO) players in what would have been MLB’s first games here in 100 years.

“MLB has had ongoing contractual issues with the event promoter that we have been trying to resolve for some time,” said Jim Small, MLB’s senior vice president of international operations, in a statement.

“Regrettably, we are at a point where we have to cancel the upcoming tour because the event is unable to meet the high quality our Korean fans deserve.”

Small apologized to baseball fans in Korea and added, “MLB and the KBO have had a long relationship together partnering on efforts to grow our sport. We look forward to continuing to work with them to bring future events to Korea.”

The KBO said it had informed MLB of “deep regrets” the KBO had over the cancellation of the event.

“Having prepared for these games upon earlier request from MLB, we are extremely dismayed by this decision,” the KBO said.

“We will also let MLB know of the inconvenience this has caused players who have been building up for these games and of the inability to keep promise with Korean fans.”

The KBO shared a brief timeline of how the preparation had gone, saying MLB had “repeatedly asked” the Korean league to host the World Tour.

“MLB told us earlier this year it had settled on a promoter, and Commissioner Rob Manfred made his official request for the World Tour in April,” The KBO said.

“Even though we expected challenges in assembling our team due to scheduling issues, we decided to cooperate with MLB to help globalize the game of baseball. We regret confusion and inconvenience this cancellation has caused our fans.”