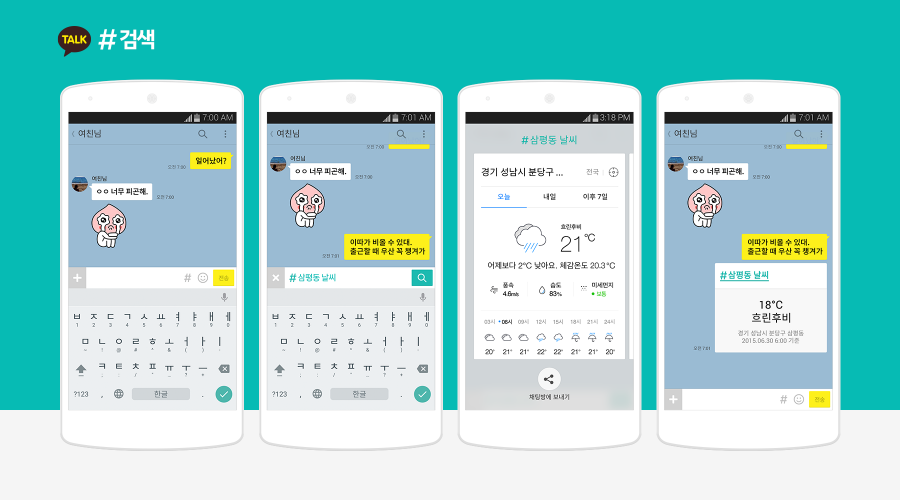 The decision came about one year after Kakao, which runs the nation’s No. 1 mobile chat app KakaoTalk, refused to hand over the conversation records of criminal suspects to the prosecution, citing its privacy policy.

“After a careful review, we decided to comply with the prosecution’s monitoring warrants,” Kakao said in a statement on Tuesday, after the nation’s top prosecutor said in a parliamentary hearing that “both institutions have found a way to execute (warrants) in a smooth manner.”

At the heart of the issue is concern that if prosecutors can access records of a group chat that includes a criminal suspect, it can violate the privacy of other participants involved in the conversation.

To solve the issue, Kakao said the identities of other participants of the conversation will remain anonymous when the records are handed to prosecutors.

Prosecutors cannot know the identity of other members in the group chat, and they will have to go through an official procedure to request any personal information on them, the company said.’

If users are still concerned, they can choose to use “privacy mode” based on encryption technology, in which the messages are stored in special letters that cannot be de-coded unless accessed through a user’s smartphone, Kakao said.

In October last year, KakaoTalk users defected to Telegram and other messenger apps in droves due to fear of snooping by the prosecution, which formed a cyber investigation team after President Park Geun-hye spoke out against online rumors.

Some claimed that the government may actually be spying on their conversations on a real-time basis.

Although Kakao claimed that it is technologically impossible for the government to monitor chat records on a real-time basis, it was insufficient to settle the public scare, prompting the company to spurn the prosecution’s monitoring warrants.

Kakao has also faced criticism that its privacy policy may interfere with prosecution investigations into serious crimes as chat records can serve as crucial evidence.

A prosecution official said prosecutors will not abuse their monitoring rights, saying, “We will not receive any data that are not related to crimes.”

Kakao’s latest decision is widely expected to help warm icy relations between Kakao and the prosecution.

Last year, Prosecutor General Kim Jin-tae even threatened to “break open the doors of Kakao” if the company continued to refuse to cooperate with its investigations.

Amid the tension, Lee Sirgoo, former CEO of Kakao, was questioned in December on charges of allowing a massive amount of child pornography to be shared on its platforms.

While online service providers are obliged to take due measures to identify child pornography on their networks according to South Korean law, others saw the summons as the prosecution’s retaliation for its refusal to accept monitoring warrants.

Prosecutors, meanwhile, said they have not sought any monitoring rights on Kakao chat records since the second half of 2014.