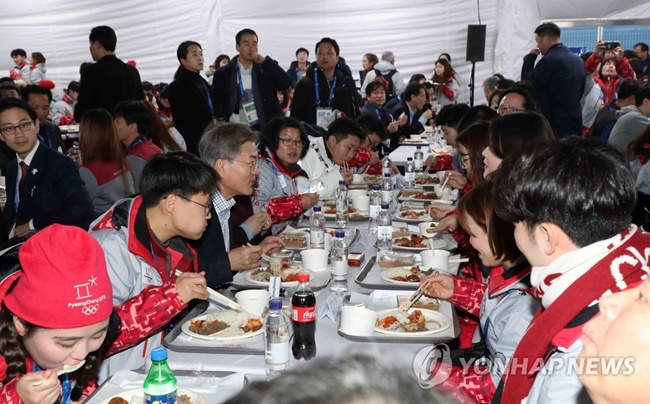 Up to 500,000 meals worth 3.5 billion won were purchased via the digital meal vouchers during the 60 days around the Winter Games, Vendys, the startup company behind the money-saving idea, said on Monday. (Image: Yonhap)

SEOUL, Mar. 26 (Korea Bizwire) — The organizers of the PyeongChang Olympics were able to economize nearly 500 million won thanks to mobile meal vouchers.

Up to 500,000 meals worth 3.5 billion won were purchased via the digital meal vouchers during the 60 days around the Winter Games, Vendys, the startup company behind the money-saving idea, said on Monday.

Thanks to the smart payment system, which was used at 35 establishments accommodating some 15,000 people, food spending stood at 3.5 billion won, 500 million won short of the original budget of 4.0 billion won.

The PyeongChang Olympics became the first Olympics in history to introduce mobile meal vouchers for volunteers, as physical vouchers and cash were distributed at previous Olympics.

Mobile meal vouchers boast significant advantages over physical coupons as voucher holders can change their meal schedule ahead of time.

In fact, the PyeongChang Organizing Committee distributed an allocated number of vouchers, the dates of which could be changed, and volunteers were able to do so in line with personal preferences and weather conditions, preventing the vouchers from being wasted, according to Vendys.

“Due to the nature of the event, many scheduling changes were expected for the volunteers, leading to concerns over a budget deficit. As the scheduling changes were reflected in the estimated amount of food consumption, we were able to effectively save 500 million won,” said An Gwang-yeol, a senior official of administrative affairs.

“Through this opportunity, we proved a mobile meal voucher system can work not only for companies but in other types of settings,” said Cho Jeon-ho, the CEO of the company.

Since its release in 2014 as the first mobile meal voucher service catering to companies in South Korea, Sikdae helped spread the adoption of smart meal payment systems in the business sector, giving workers points that can be exchanged for meals at nearby franchise restaurants.

The system is currently used at up to over 170 companies, with nearly 3.3 billion won worth of coupons traded every month.