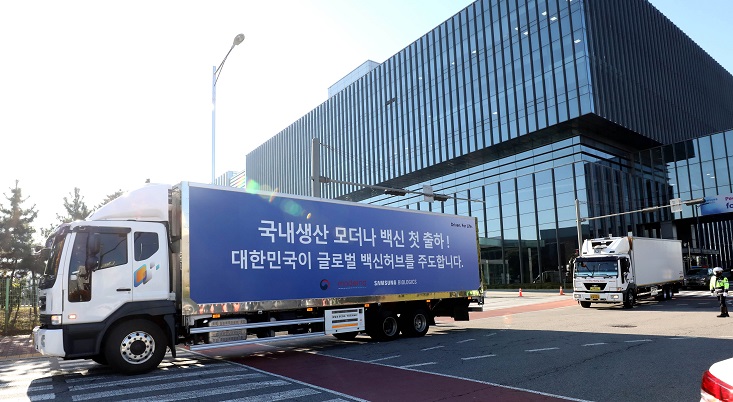 In May, the biotech unit of South Korea’s largest conglomerate Samsung Group, signed a contract with Moderna Inc. to provide contract manufacturing organization services for the U.S. biotech company’s mRNA vaccine at its plant in Songdo, Incheon, 40 kilometers west of Seoul.

The first batch — part of 2.43 million doses of Moderna vaccines to be manufactured at Samsung Biologics’ third plant in Songdo — will be used to administer both first and second shots, as well as booster shots, during the fourth quarter.

It marks the second time that COVID-19 vaccines manufactured in South Korea have been used for inoculating South Koreans.

SK Bioscience Co, the vaccine-making subsidiary of South Korea’s SK Group, has been producing COVID-19 vaccines at its plant in the country by British-Swedish pharmaceutical giant AstraZeneca and Oxford University.

About 40.97 million people, or 79.8 percent of the country’s 52-million population, had received their first COVID-19 vaccine shots as of Wednesday. The number of fully vaccinated people came to 36.97 million, or 72 percent.