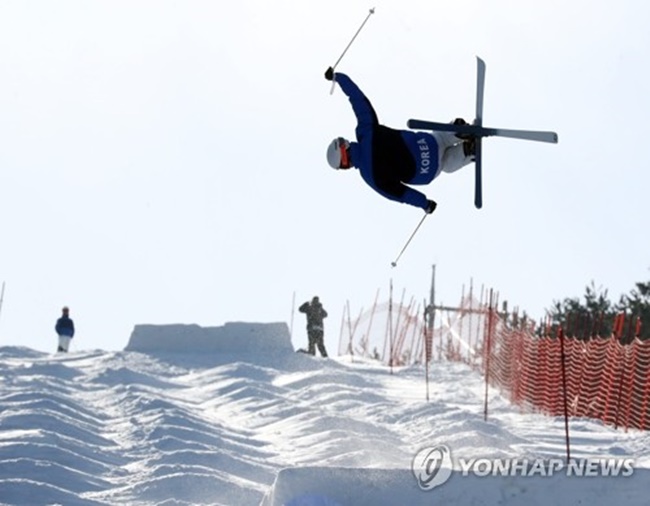 HOENGSEONG, South Korea, Feb. 2 (Korea Bizwire) – Although he isn’t a star athlete, South Korean mogul skier Seo Myung-joon has a big ambition for the upcoming Winter Olympics: to promote what mogul skiing is all about.

Seo is one of four South Koreans who will compete in moguls at the PyeongChang Olympics. And he is the only one who doesn’t have previous Olympic experience.

“I have big expectations for the PyeongChang Olympics, because this is my first Winter Games and it’s staged in my home country,” Seo said during a media day event at a ski resort in Hoengseong County, Gangwon Province. “I had some nerves and made mistakes before the Olympics, but now I’m ready to compete.”

Seo is currently ranked 36th in the International Ski Federation (FIS) moguls rankings. The 25-year-old said he knows what his position will be at the Olympics but will try to entertain the home fans.

“I know I’m not in a position to go for medals,” he said. “But I hope I can be a starting point to make many people know about mogul skiing.”

Seo, whose best World Cup finish of the season was 11th at an event in Dear Valley, Utah, said he wants to attract fans by showing his unique techniques.

“I’ve worked hard to build my own jump trick,” he said. “I think all my previous competitions and my practices were for the Olympics. Now, I’m in good physical condition, and my technique is ready to go.”

The qualification round for the men’s moguls starts on Feb. 9 at Phoenix Snow Park in PyeongChang, Gangwon Province, with the finals slated for Feb. 12 at the same venue.