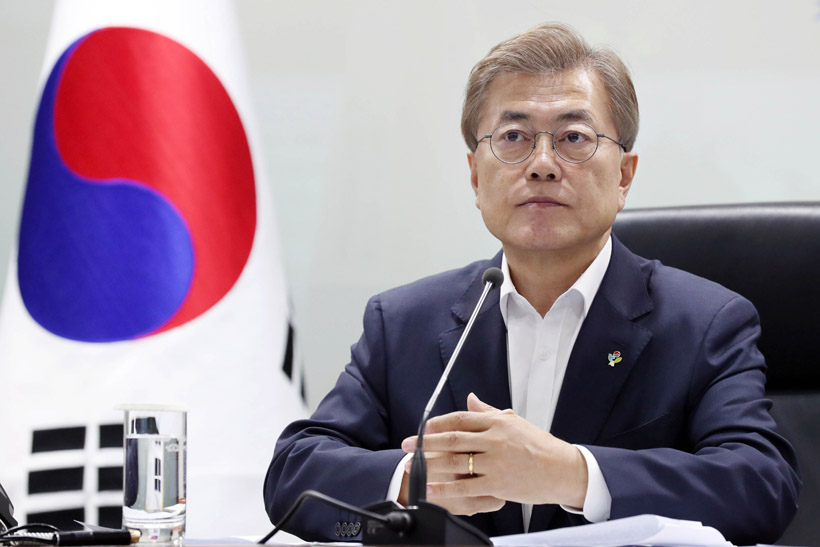 The drop in Moon’s approval rating apparently follows the recent controversy over some of his picks for new ministers and other ranking officials, including the head of the Fair Trade Commission. (image: Cheong Wa Dae)

In a survey conducted by Gallup Korea, 82 percent of 1,011 adults polled offered a positive evaluation of Moon’s management of state affairs.

The tally marked a 2 percentage-point drop from a week earlier.

Ten percent out of all respondents said the president was “not doing a good job,” up 3 percentage points from the previous week, according to the local pollster.

The drop in Moon’s approval rating apparently follows the recent controversy over some of his picks for new ministers and other ranking officials, including the head of the Fair Trade Commission.

Opposition parties have raised a series of allegations against the nominees that include false registration of addresses for personal gains.

False registration of address is against the law and is punishable by up to three years in jail or a fine of up to 10 million won (US$8,910).

However, for the nominees for new ministers, such allegations may be far more damaging for their own reputation, as well as that of the person, namely the president, seeking to appoint them to top government offices.

So far, the president has named seven new members of the Cabinet. He has been able to appoint only one.

Amid the apparent impasse at the National Assembly over the president’s nominations, the approval rating of Moon’s ruling Democratic Party also slipped 2 percentage points on-week to 48 percent.

Still, it was far higher than the 10 percent and 8 percent ratings for the main opposition Liberty Korea Party and the center-left People’s Party, respectively.

The weekly survey had a margin of error of 3.1 percentage points and a confidence level of 95 percent.