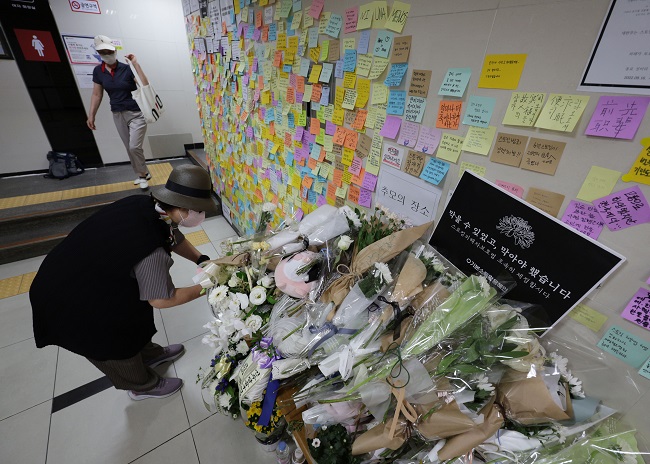 Flowers are placed in front of a public restroom at Sindang Station on the subway line No. 2 in Seoul on Sept. 16, 2022, following the murder of a 20-something female colleague by a 31-year-old subway station worker in the restroom on Sept. 14. (Yonhap)

SEOUL, Dec. 2 (Korea Bizwire) — More than 12 months into the implementation of the anti-stalking act, relevant criminal activities are taking on a more devious approach to evading punishment.

The Korea Women’s Hot Line, a non-profit women’s rights activist group, reported a case in which a stalker continuously harassed a victim’s friend after finding the person’s cellphone number on a business registration certificate.

In another case, the stalker posted threatening expressions or photos that only the victim could recognize.

Calling the victim’s company to keep track of the victim’s whereabouts was another way of stalking while evading the law.

“These are cases in which the police said there isn’t much they can do,” said Choi Yoo-yeon, a senior official at the Korea Women’s Hot Line said.

This change is largely attributed to the extremely narrow definition of stalking stipulated in the anti-stalking act, which fails to encompass the diversifying forms of stalking.

“The anti-stalking law places continuity and repetition as primary conditions for stalking, which means it does little to prevent ‘one-time’ stalking crimes,” Choi said.

The police reported that some 29,000 cases of stalking have been reported to the police since the anti-stalking act came into effect in October of last year, which is 1.5 times more than three years ago (19,000 cases).