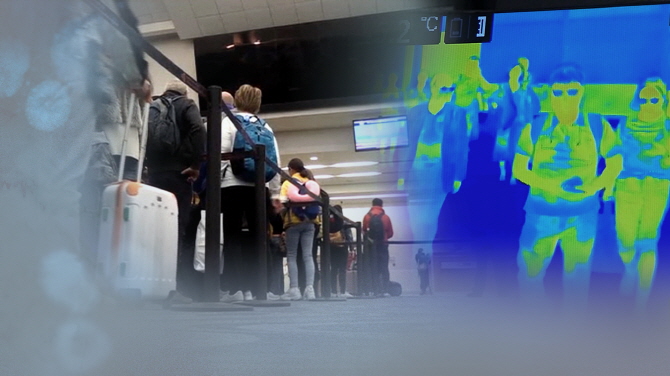 So far, 17 countries have imposed entry bans, up four countries from a day earlier, with 13 others having toughened quarantine processes. (Yonhap)

SEOUL, Feb. 26 (Korea Bizwire) — The number of countries imposing entry bans on travelers who recently visited South Korea’s southeastern city of Daegu and the nearby county of Cheongdo is on the rise, Seoul’s foreign ministry said Wednesday, following a spike in confirmed novel coronavirus cases there.

Earlier in the day, Japan approved the ban on travellers who have been in Daegu or Cheongdo in the past two weeks. Daegu and the surrounding North Gyeongsang Province, to which Cheongdo belongs, have been hit the hardest by the virus.

Tokyo’s decision comes on the heel of a string of entry restrictions on visitors from Korea enacted by other countries.

So far, 17 countries have imposed entry bans, up four countries from a day earlier, with 13 others having toughened quarantine processes.

Vietnam imposed an entry ban on Tuesday, one day after it barred 18 South Korean tourists who flew into Da Nang from Daegu from entering the country.

The Southeast Asian country has said it will deny entry of anyone who has visited Daegu or North Gyeongsang Province in the last two weeks.

Hanoi has already said it will quickly quanrantine anyone who has been to South Korea recently and shows symptoms, such as fever.

Singapore put the entry ban into force earlier this week after raising its travel alert for the two areas recommending against making trips there.

Japan has also raised the travel alert level for the two regions and called on its citizens to avoid visits.

According to the foreign ministry, 22 countries, including the Netherlands, France and Austria, have either raised travel advisory alert or recommended their nationals nonessential travel to South Korea.

Media reports said that Mongolia has decided to halt all incoming flights from South Korea, China and Japan and is keeping close tabs on 28 churches attended by South Koreans within the country.

The ministry’s latest list, however, doesn’t include China, the epicenter of COVID-19 outbreak, although the country’s provincial cities have been imposing forcible quarantine measures on people flying from South Korea.

Chinese authorities in cities like Weihai and Shenyang have been placing passengers from South Korea under a quarantine program.

Chinese foreign ministry spokesman Zhao Lijian said that some cities’ strict quarantine measures against people from South Korea and Japan are to protect its nationals. 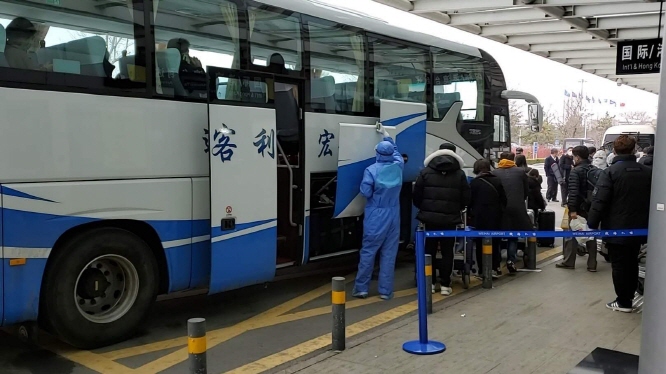 South Korean tourists are forced to get on a bus for isolation upon arrival at the Weihai airport in China’s Shandong province on a flight from Incheon International Airport, west of Seoul, on Feb. 25, 2020. (Yonhap)

About 80 percent of confirmed cases in South Korea came from Daegu and North Gyeongsang Province, where Cheongdo is located, about 300-320 kilometers away from Seoul.

As of Wednesday, South Korea had added 284 new cases of the new coronavirus, bringing the total number of infections to 1,261, with 12 fatalities.

Japan has barred the entry of foreigners from China’s Hubei province, where Wuhan, the epicenter of the virus outbreak, is located, as well as Zhejiang province.

In the meeting, Cho apparently stressed that no excessive measures should be taken against Koreans and explained Seoul’s containment efforts to the Japanese side.

In a similar move, the senior official said in an interview on a local cable channel that Beijing needs to seriously contemplate the actions it takes towards South Korea to block any inflow of coronavirus risks.

“South Korea, despite facing various challenges, did our best to help China,” Cho said. He added that Seoul made clear its stance that any travel restrictions must be kept to a minimum.

The South Korean government has not taken steps to broadly ban arrivals from China, despite mounting public pressure to do so.

The country has formally issued regrets to countries that imposed restrictions against and detained South Koreans in recent days. It has made an effort to explain quarantine and treatment processes to get the situation under control.

Related to the travel restrictions imposed by other countries, 15 South Korean couples who had been quarantined in Mauritius on their honeymoons arrived at Incheon International Airport on Wednesday.

They were put in isolation on arrival in the Indian Ocean nation and told by authorities that they were being held as a precautionary measure.

After being told they would have to remain in isolation for 14 days, the couples opted to return home. Their return comes hours after five other couples arrived at Incheon after Mauritius denied them entry, citing coronavirus fears.