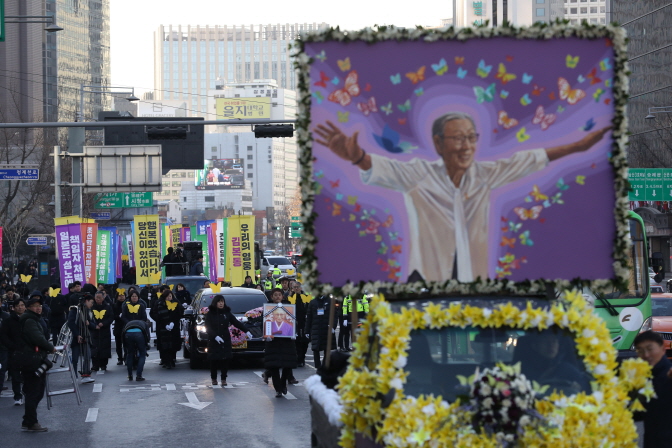 SEOUL, Feb. 1 (Korea Bizwire) — Hundreds of citizens and activists marched along the main streets of central Seoul on Friday to mourn the death of an iconic Korean victim of Japan’s World War II sex slavery.

Some 1,000 mourners gathered at the public square in front of Seoul City Hall early in the morning for a memorial event for Kim Bok-dong, an outspoken advocate against war violence who died early this week.

The iconic survivor of sexual enslavement and activist who fought for Japan’s atonement over war crimes died late Monday at Yonsei Severance Hospital at age 93. She had been battling cancer.

Yoon Mi-hyang, head of the Korean Council for Justice and Remembrance (KCJR), a civic group representing the victims, was by her side in her last moments. Kim had no family.

One of the streamers bore the message, “May she flutter like a butterfly,” quoting what she had once said in an interview, expressing her wish for her ashes to be scattered on a mountain hill when she dies.

President Moon Jae-in left a similar message in the visitors’ log when he came to the mortuary to pay tribute in person on Tuesday.

Citizens who joined the march held sticks each bearing a yellow butterfly made out of paper.

A voice recording of Kim being played from a van resounded through the streets as the funeral procession headed to the Japanese embassy building.

“You go and tell the Japanese government to fix it as soon as possible. Do you understand? We’re not fighting to get compensation, not even 100 billion (won) would do it. … They’ve got to apologize.” 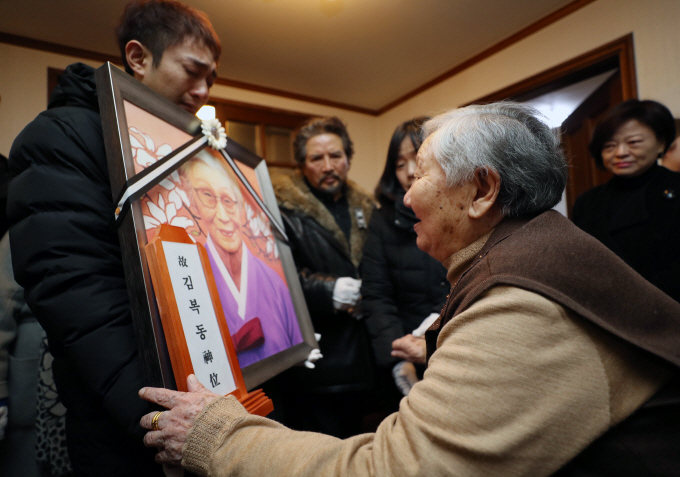 Gil Won-ok, a surviving wartime sexual slavery victim, looks at the portrait of her late friend, Kim Bok-dong, at a shelter run by a group advocating the victims in Seoul’s western district of Mapo on Feb. 1, 2019. (Yonhap)

Earlier in the day, the vehicle carrying Kim made a stop at a shelter run by the KCJR, where she had lived before her death.

The coffin in the vehicle was moved from the Yonsei hospital mortuary at 6:40 a.m. Lee Yong-su, another surviving victim, bowed to pay her respects and bid a last farewell to her friend. Dozens of KCJR officials also paid one last tribute.

Police controlled the traffic and escorted the vehicle on the way to the shelter.

The arrival of the funeral car was met by the tears of her acquaintances and funeral participants waiting at the shelter.

A participant holding Kim’s portrait went into her bedroom. Pointing to her wardrobe, Yoon promised Kim that she would take care of the clothes she wore every Wednesday to the regular protest rally near the Japanese embassy.

“I will leave them as they are, I promise,” Yoon said.

Gil Won-ok, another victim who lived at the shelter with Kim, tenderly stroked Kim’s portrait with her hands.

“You didn’t have to go this fast. … You go and rest in a nice spot, I’ll come behind you soon,” Gil said.