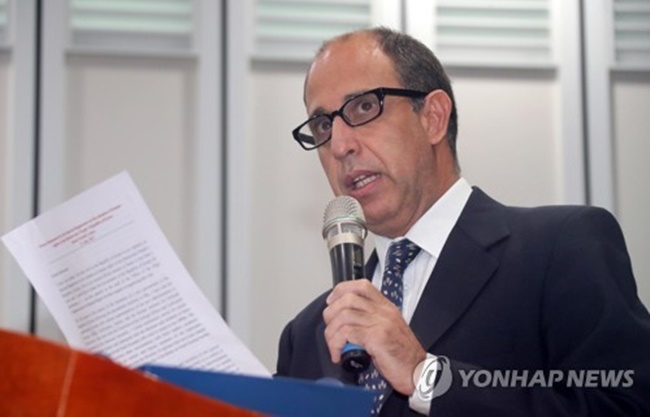 Special Rapporteur Tomas Ojea Quintana still emphasized that at the center of the rapprochement drive should be efforts to protect human rights of many North Koreans faced with continued violations that severely affect their lives. (Image: Yonhap)

SEOUL, July 21 (Korea Bizwire) – A U.N. point man on the human rights situation in North Korea welcomed the South Korean government’s decision to seek dialogue with Pyongyang on Friday, saying that it is a “reassuring step forward” lowering tensions between the two Koreas.

Special Rapporteur Tomas Ojea Quintana still emphasized that at the center of the rapprochement drive should be efforts to protect human rights of many North Koreans faced with continued violations that severely affect their lives.

“Let me, particularly, welcome Seoul’s decision to seek dialogue with Pyongyang and explore possibilities for mutual cooperation,” he said during a press conference in Seoul. “This is a reassuring step forward to lower tensions.”

Quintana wrapped up his five-day stay here on Friday aimed at collecting information about human rights violations in North Korea by meeting with government officials of relevant ministries, experts and those who defected from the communist state.

This is his second trip to Seoul since taking office in August last year. He is to submit a report on the human rights situation in the North at the U.N. General Assembly to be held in October.

His visit coincided with an offer from the Moon Jae-in government to hold military talks with the North and Red Cross talks to discuss reunions of families separated by the 1950-53 Korean War. There has been no official response from the North on the overtures.

“I very much hope that the DPRK (North Korea) will respond positively to the Moon initiative in the interest of long-term peace, security and humanitarian cooperation between the two countries,” he said. “At the same time, let me emphasize that the protection of human rights should be central to this policy of rapprochement.”

Citing his conversation with government officials, experts and some North Korean defectors, Quintana expressed concerns over widespread corruption in the North, among other things. He also voiced worries about a surge in detentions and forced repatriations of North Koreans caught in China.

“I shared these concerns with the Chinese authorities recalling their obligations under the 1951 Refugee Convention as well as relevant parts of the U.N. system,” he said. “I urge them again to address this problem by giving special protection to DPRK citizens who transit through China’s territory.”

He also urged both South and North Korea not to “politicize” the 12 North Korean restaurant workers who came here from China last year. The North claims that they were kidnapped by the South but the Seoul government says that they defected to the South of their own will. The North has conditioned the resumption of reunions of separated families on their return.

“Whereas I am pleased to learn that these women are safe and not held in detention, I see inconsistencies in the narrative concerning their cases, and will be following up with cornered governments,” he said.

“Here let me urge the two Koreas to avoid politicizing the situation of these women and strictly focus on their interests, protection needs and the needs of their families,” he noted.

Quintana explained that the “inconsistencies” in the narrative with regard to the 12 North Korean restaurant workers stemmed from his government sources and non-government sources. He didn’t want to elaborate further.

He, meanwhile, hoped to travel to the North where he wants to meet both its authorities and ordinary citizens and know much more about the reality that many of them are facing in their daily lives, though he said that Pyongyang has not allowed his trip to the reclusive state so far.

“I am still trying to pursue engagement in this respect. I understand this might take time. And I am sure that the authorities here in the Republic of Korea also have the same understanding of what entails in a process of engagement,” he said.