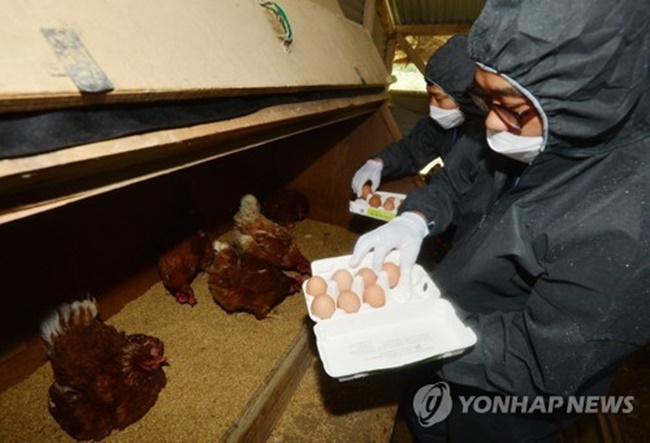 Workers from the agriculture ministry are seen collecting egg samples from a farm in Hwaseong, Gyeonggi Province, on Aug. 15, 2017. Some eggs at a farm with 80,000 hens in Namyangju, east of Seoul, were found to contain the pesticide fipronil. (Image: Yonhap)

SEOUL, Aug. 16 (Korea Bizwire) – The South Korean government said Wednesday that eggs from four more farms in the country have been found to be contaminated with harmful pesticides, escalating the health scare over tainted egg products here.

Some eggs at a farm with 55,000 hens in Cheorwon, 80 kilometers north of Seoul, were found to contain the pesticide fipronil, the Ministry of Agriculture, Food and Rural Affairs said. Fipronil, often used to kill fleas or mites, is banned from being used on chickens in South Korea.

Eggs from another farm in Yangju, just north of Seoul, with 23,000 hens were also found to be contaminated with over a permissible level of bifenthrin, it said. Eggs from two more farms, in Naju and Cheonan, were also found to have contained over a permissible level of bifenthrin, a restricted-use pesticide, raising the number of contaminated farms to six in total so far.

It was not immediately known how many eggs from the farms were released into the market.

“As the head of the government ministry in charge of food safety, I offer an apology for the latest tainted eggs,” Agriculture Minister Kim Yung-rok said in a press conference. “We are taking swift and strong measures. All polluted eggs and egg products will be discarded.”

He said eggs that pass the government-led quarantine examination will be fully distributed and sold at retail stores from Friday.

Since Tuesday, the government has been carrying out inspections on 243 farms, which are responsible for about a quarter of the amount of eggs circulated in the country, after eggs from local farms were found to be contaminated by pesticides earlier this week.

The government plans to complete the nationwide inspection by Thursday.

All farms have been banned from distributing eggs since Tuesday, and the country’s top three discount store chains and other retailers, including convenience stores, pulled eggs off their shelves Tuesday, although some outlets resumed the sale of eggs believed to be free from pesticides earlier in the day.

After a part-government policy coordination meeting, Prime Minister Lee Nak-yon said contaminated eggs have not spread widely across the country.

“A little more pesticide tends to be used during the summer season due to mites living on hens,” Lee said, adding the distribution of eggs will return to normal by Friday.

The local education offices in Seoul and the second-largest city of Busan issued temporary bans on the use of eggs in school meals.

“We sent out instructions asking schools to stop using eggs in school meals for the safety of students, as concerns grew in the wake of the detection of pesticides in eggs,” an official with the education office in Seoul said.

The office plans to take additional measures after watching the results of a government inspection of eggs set for Thursday.

The education office in Busan also issued a similar instruction, saying schools should not serve eggs at meals at least until Thursday. The office said it will determine whether to extend the ban after the government comes up with the result of its investigation.

“We will use this case to further strengthen pesticide checks on school foods,” an official said.