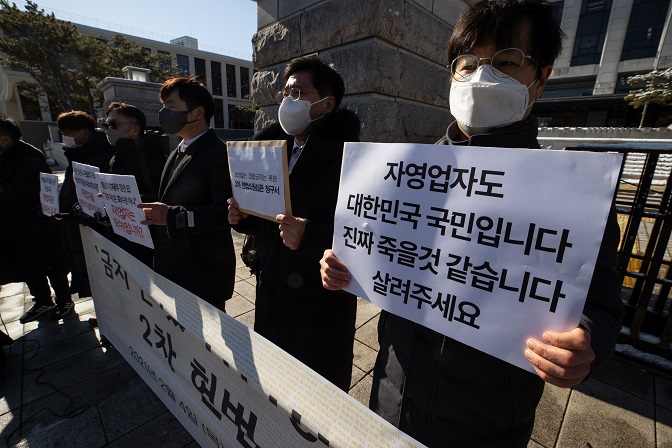 Associations of small businesses hold a press conference in front of the Constitutional Court, asking it to review whether virus-related restrictions violate their basic property rights, in Seoul on Feb. 4, 2021. (Yonhap)

SEOUL, Feb. 4 (Korea Bizwire) — Associations of small merchants filed a petition on Thursday with the Constitutional Court, asking it to review whether virus-related restrictions violate their basic property rights.

The petition is the third of its kind, with the first one filed by bar and internet cafe owners on Jan. 5 and the second one by gym owners and others on Jan. 29.

During a press conference held near the Constitutional Court, they called the business restrictions “unconstitutional,” because the Infectious Disease Control and Prevention Act, based on which the decision was made, does not have a clause pertaining to compensation.

The government imposed the strict social distancing rules of Level 2, the middle of a five-tier system, or higher, in March, August and November nationwide to control the surge in infections.

Greater Seoul has been under the second-highest scheme since Dec. 8, restricting the operation of 11 types of high-risk business establishments.

Under the rules, businesses were ordered to significantly curtail business hours and indoor dining.

While agreeing with the need for stringent measures to stop the virus’s spread, they said there should also be “just compensation.” Otherwise, the measures amounted to a violation of basic property rights guaranteed by the Constitution, they said.

They claimed that the monthslong restrictions have pushed their limits and that they are on the brink of collapse.

According to a survey by civic groups, the average sales of gyms in December, for example, fell to around 5 percent of those reported from a year ago.

The petition was signed by 1,212 business owners and submitted to the court.

They demand the government make compensation for business losses retroactively and come up with measures to help with monthly rent payments.