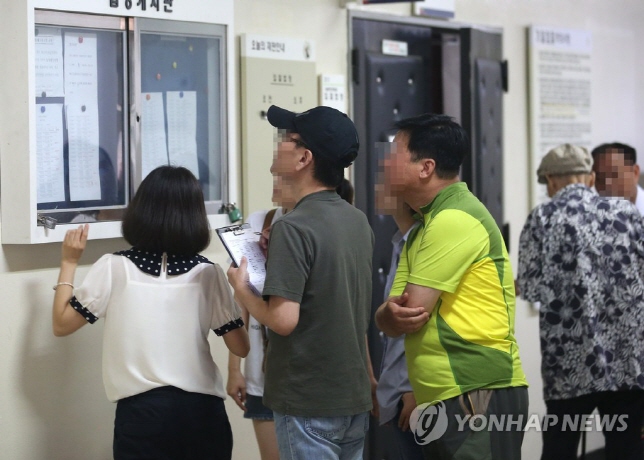 Since the global economic crisis in 2007, Gzone says that the number of public auction cases filed in court surpassed 100,000 cases each year. (image: Yonhap)

SEOUL, Jun. 21 (Korea Bizwire) — The trend of a decreasing number of court auctions recently made a turnaround for the first time in four years.

Experts say the sudden rise in properties available at court auctions is the result of more housing becoming available in addition to the extended economic downturn.

However, the growing number of auction cases are found mostly outside of the Seoul metropolitan area.

In Seoul and Gyeonggi Province, the number of public auction properties has actually fallen, signaling a polarization of the auction market between the greater Seoul region and elsewhere in the nation.

According to Gzone, a firm that deals with real estate development, the number of properties awaiting public auction between January and April of this year totaled 30,219 cases, up 6.3 percent from last year’s 28,433 cases in the same period.

Since the global economic crisis in 2007, Gzone says that the number of public auction cases filed in court surpassed 100,000 cases each year.

However, the number of applications in January of this year stood at 8,093 cases, which was a 21.5 percent increase from January of last year.

Moreover, the total number of cases in April (7,737 cases) was 10.2 percent higher than last year, showing a steady increase in the number of real estate properties put up for public auction at court.

The region hit most severely with the real estate slowdown was Ulsan, where the slump in the shipbuilding industry affected the economy of the entire city.

The total number of public auction cases in Ulsan between January and April saw an increase of 33.7 percent over the previous year.

The real estate industries in both South and North Gyeongsang Provinces showed a slowdown, with increase rates of 13.1 percent and 22.2 percent, respectively.