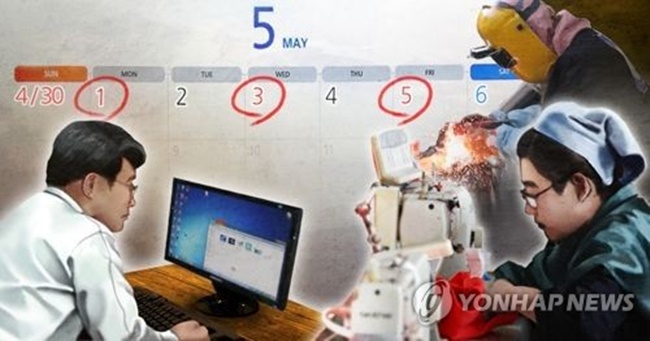 Job information portals JobKorea and Albamon asked 1,387 salaried employees and 699 job seekers about their plans for the first week of next month. (Image: Yonhap)

SEOUL, April 21 (Korea Bizwire) – More South Koreans plan to keep working in early May when there is a string of holidays, but many expect to spend more money than last year, a survey said Friday.

Job information portals JobKorea and Albamon asked 1,387 salaried employees and 699 job seekers about their plans for the first week of next month.

Many locals get time off for May 1, Labor Day, while two days later is Buddah’s Birthday. May 5 is Children’s Day, a national holiday. Workers can use vacation days for the two days in between, which would extend the holiday to nine days including the weekends.

Survey results said 64.2 percent of workers said they won’t be using their vacation days. Close to 36 percent said they plan to work on Labor Day.

Among those who were taking some time off during the period, 27 percent said they will travel in the country while 3.5 percent said they will be going abroad. Other answers included using the extra free time to enjoy cultural events and go on short outings (17.7 percent) with quite a few saying they will rest at home (32.9 percent).

Another 10.8 percent said they will use the holidays to prepare for a job change.

Regardless of whether they will be going to work, people expected to spend more this year during the holiday than last year. The average holiday budget was 516,000 won (US$454.90), up more than 30 percent from 392,000 won for last year, according to the survey.

The heaviest spending planned for next month was for Parents’ Day on May 8. Although not an official holiday, on average people expect to spend 272,000 won on the day for gifts and meals.