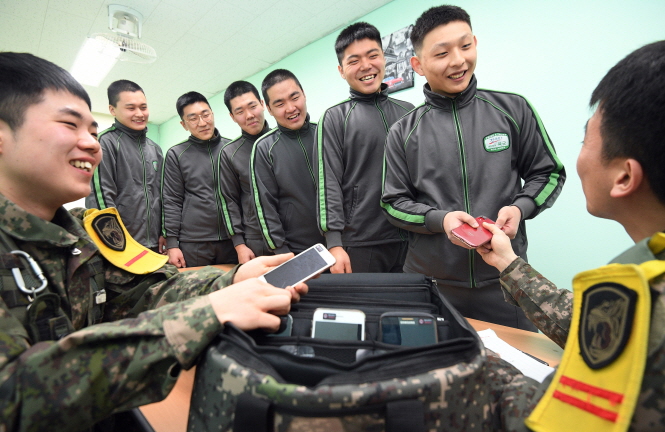 The numbers of soldiers seeking counseling services over isolation or the difficulty of adapting, as well as the number of abuse cases, have been on the decline. (Yonhap)

SEOUL, Jul. 16 (Korea Bizwire) — Rank-and-file soldiers, newly allowed to use mobile phones after work, found the measure useful in improving communication not only with those off base but also with their superior officers, a survey showed Tuesday.

In April last year, the defense ministry began to allow conscripts to use mobile phones on a trial basis, something that had previously been banned for security reasons.

Currently, about 360,000 draftees use such devices at their barracks.

The ministry had initially planned to officially implement the measure around this month.

Recently, some enlistees have come under a probe over alleged illegal mobile gambling. Two Army soldiers also allegedly committed cyber sex crimes at the barracks, according to a local civic group.

Despite concerns, however, there was found to be no relation between soldiers’ mobile phone usage and their physical strength, and no security-related incidents, such as the leaking of classified military information via mobile phones, took place, according to the ministry.

A survey also found positive responses from draftees with regards to their cellphone use after work.

According to the poll of 4,671 draftees across the nation conducted by the Korea Institute for Defense Analyses, 96.3 percent said using a cellphone helped improve their communication with the outside world, and 79.1 percent responded that allowing the use of the device helped them better adjust to military life.

Some 83.7 percent also responded that the measure had a positive impact on their self-development efforts.

The numbers of soldiers seeking counseling services over isolation or the difficulty of adapting, as well as the number of abuse cases, have been on the decline, the survey showed.

Presiding over a military service committee meeting on Monday, Defense Minister Jeong Kyeong-doo called for the thorough examination of related policy measures to minimize potential side effects and to better guarantee soldiers’ autonomy at the barracks, according to the ministry.