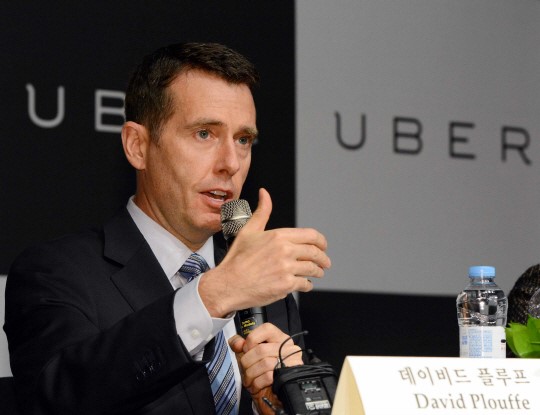 David Plouffe, the senior vice president of policy and strategy, asked the Seoul government to set up a registration system that requires Uber drivers to meet a certain standard, including training and experience, which will in effect help curb potential safety risks and insurance coverage concerns.

“Many cities are adopting this approach. They’ve started to pass forward-looking regulations for the ride-sharing service. That’s what we believe we need to do in Korea,” he said at a press conference held in Seoul.

Uber Korea, launched here in 2013, has been under intense scrutiny from local taxi drivers and in dispute with the government as its unregistered ride-booking service is currently regarded as illegal.

Plouffe, however, did not further elaborate on details of such a registration system for Uber drivers, only to imply that the legalization of Uber will bring benefit to the overall economy.

“The taxi industry (in Korea) is almost exclusively a cash industry, but Uber provides a cashless service that is good for local businesses as well as consumers that can change the overall transportation market,” he said.

A few hundred taxi drivers staged a protest at the entrance of the hotel where Plouffe spoke, demanding Uber leave the country so they can secure their jobs.

Plouffe said Uber “will eventually be a perfect fit” for Korea, one of the most IT-savvy countries in the world, as it will benefit both riders and drivers in the long term, citing the latest partnership agreement the firm signed with a local taxi company based in the South Korean port city of Incheon.

“We are eager to seek solutions with Korean officials at a local and national level, to offer an alternative service that works well for the city.” he said.