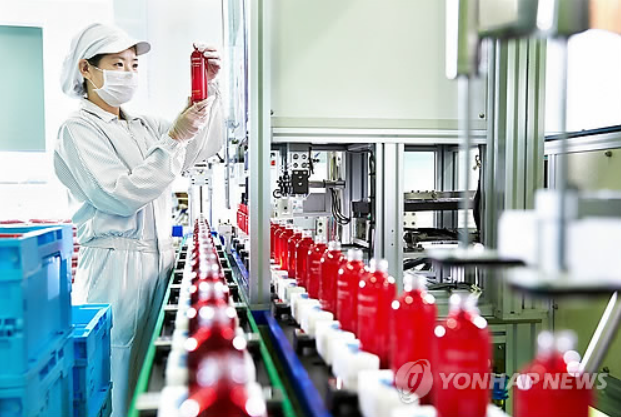 An employee at Amore Pacific, a South Korean cosmetic maker, examines a sample at a factory in Shanghai. (Image courtesy of Yonhap)

SEOUL, March 20 (Korea Bizwire) – Shareholders of Amore Pacific Co., South Korea’s leading cosmetics firm whose share price is the most expensive in the country at more than 3 million won (US$2,678), approved a 10-for-1 stock split in a unanimous vote during their annual meeting on Friday, raising questions about who could be next.

Investors welcomed the news when Amore Pacific said on March 3 it would split its stocks to increase the number of shares in circulation, its stocks soaring to maximum daily gain of 15 percent in mid-day trading. Its shares in the Seoul bourse have risen 15.5 percent since the announcement.

Company shares have made giant steps on hopes of Amore Pacific’s flourishing business in China. Its ordinary stocks almost tripled over the past year, making them too expensive for retail investors.’

Although the split does not affect the company’s value, market watchers and company officials expect that affordable prices will further boost Amore Pacific’s stock performance.

Trading of Amore Pacific will be suspended from April 22 and resume on May 8 at the new price.

South Korean firms whose shares cost over 1 million won have not been in a hurry for stock splits as the expensive price tag is often considered the hallmark of a valuable company. In the United States, stocks over $100 often opt for splits, and blue-chip stocks, such as Apple and Starbucks, have lowered per-share prices several times.

The atmosphere has been slowly changing in South Korea, however, as foreign investors and the bourse operator are stepping up pressure on costly stocks to lower their face value to boost turnover and make them approachable to more traders.

The Korea Exchange (KRX) has been pushing companies to divide the number of existing shares to bring in more liquidity to the overall stock market. Its chairman Choi Kyung-soo has met with officials from major companies over the past few months to encourage them to lower share prices for active trading and become more shareholder-friendly. 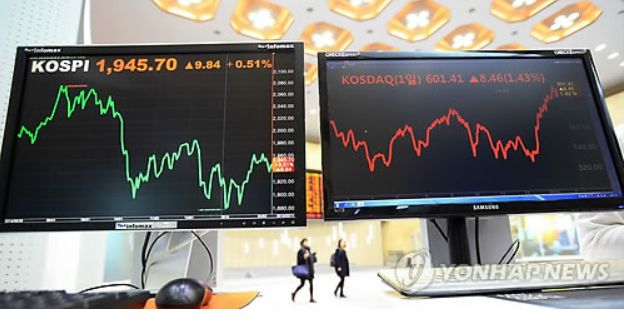 Following Amore, the next targets are Samsung Electronics Co., the nation’s largest firm by market value, and two Lotte Group affiliates — beverage maker Lotte Chilsung and Lotte Confectionery, whose shares are traded between 1.6 million and 1.7 million in the main KOSPI market.

Samsung Electronics, whose shares change hands at just under 1.5 million won, has said it has been considering splitting its stocks, but will look more into the long-term effect before making any decision.

“We acknowledge that there is a psychological effect of a stock split, but its impact on the long-term corporate value needs further study,” Lee Myung-jin, a senior investor relations official at Samsung Electronics, said on Jan. 20 in a Seoul meeting hosted by the KRX. “We have been reviewing stock splits, but not yet have come to a point to make a decision.”

Lotte officials also said they will consider the KRX’s proposal, but the issue was not even raised during the company shareholders’ meetings on Friday.

Despite the lukewarm response, bourse officials vowed continued efforts by making an index based on trading volume and introducing the market maker system.

“Although the effect of stock splits may vary depending on a company’s value and the market environment, it can encourage trading among retail investors and positively affect share prices,” KRX official Lee Kyu-yeon said.

In South Korea, 53 companies have divided shares from 2010-2013, during which their average trading volume soared 184.32 percent and share prices inclined 29.94 percent, according to the KRX.

Large-cap equities enjoyed bigger benefits. Top 300 stocks saw their prices go up 56.9 percent after stock splits in the period between 2005 and 2009, while smaller caps edged up 1.7 percent during that time, it said.

Market watchers mostly agreed that splits could boost the market value of good quality shares with low turnout, while some remained skeptical.

“Split stocks become more accessible to retail investors thanks to their cheaper prices. Increased liquidity can push up prices of shares that have been undervalued for their earnings,” Kang Hyun-ki, an analyst at I’M Investment & Securities, said.

“I wonder how many investors can’t buy stocks because they are expensive,” said Lee Jae-man, a researcher at Hana Daetoo Securities. “Lowering the stock transaction tax will be more efficient in inducing investment.”

Cho Byung-hyun, a researcher at Yuanta Securities Korea, worried that stock splits can expose companies to greater volatility and speculative forces because lower prices attract high-frequency traders who buy and sell hundreds of shares in fractions of a second, attempting to profit from the price disparities.

“There is no difference between buying 10 of 10,000 won shares and buying one of 100,000 won shares,” Cho said. “Splits could raise volatility of large-cap stocks that have a large impact on the benchmark index.”

For family-run conglomerates, whose affiliates are linked through a complex web of cross-shareholding structure, having more shareholders may not be enticing since a bigger number of them could well mean stronger pressure and demand for shareholder-friendly policies.

During a meeting at Samsung Electronics last week, for example, several shareholders took the microphone to criticize the tech giant’s selection of outside board directors, executives’ salaries and other issues.