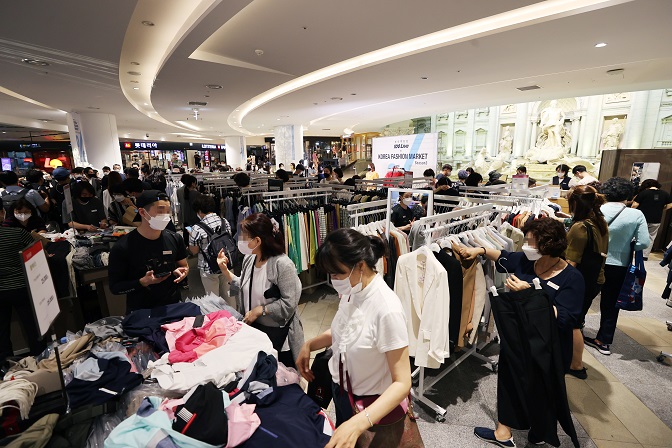 Visitors shop for clothes at a department store in southern Seoul on June 25, 2021. (Yonhap)

SEOUL, April 4 (Korea Bizwire) — More than 60 percent of those in the “MZ generation,” a Korean term referring to those aged between late 10s and 30s, have a preference towards products from companies that focus on environmental, social and corporate governance (ESG) management even if they are more expensive, a survey showed Sunday.

According to a survey conducted by the Korea Chamber of Commerce and Industry of 380 MZ generation members, 64.5 percent of the respondents said that they intended to buy products from reputable companies that embrace ESG principles even when prices are more expensive.

When asked how much more they would be willing to pay for products from companies with strong ESG management, 65.7 percent said less than 5 percent, while 29.8 percent said they would pay 5 to 10 percent more.

The share of those who said they are willing to pay more than 10 percent stood at 4.2 percent.

“Faith-based consumption is spreading as the MZ generation, which places more emphasis on psychological satisfaction than cost effectiveness, emerges as a major consumer group,” said Rhee Jae-hyuk, a professor of business administration at at Korea University.

In response to a question asking what roles are most desirable for businesses, 51.3 percent picked ‘the implementation of transparent and ethical management,’ followed by job creation at 28.9 percent and environmental protection at 13.2 percent.