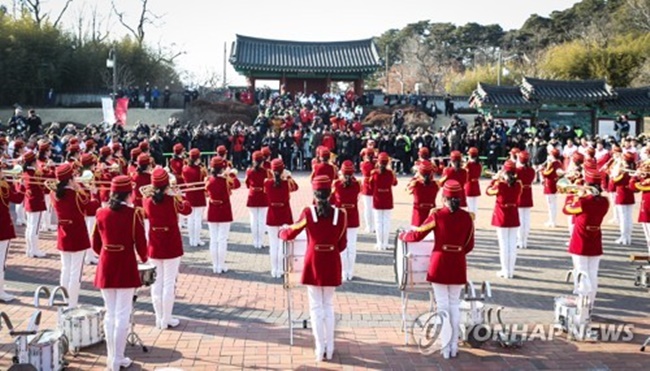 Members of North Korea’s cheering squad stage a surprise performance at Ojukheon where Joseon Dynasty scholar Yi I and his mother Shin Saimdang were born, in Gangneung, Gangwon Province, on Feb. 13, 2018. (Image: Yonhap)

GANGNEUNG, South Korea, Feb. 13 (Korea Bizwire) – North Korea’s cheerleaders visiting the South for the PyeongChang Winter Olympics staged a surprise performance Tuesday during their trip to a tourist attraction in Gangneung, a sub-host city of the Olympics.

Some 80 members of the squad visited Ojukheon, the birth home of Yi I, a 16th century prominent Confucian scholar, and his artist mother, Shin Saimdang.

They played the Korean traditional song, Arirang, and other upbeat folk songs with trumpets, saxophones, clarinets, flutes and drums, in front of tourists and citizens.

Wearing red and white uniforms, the members played wind instruments in a formation while dancing slightly to the music.

A throng of reporters jostled for position to capture their 30-minute, open-air performance, while police officers prevented them getting too close to the members of the cheering squad from the communist state.

It was their first outing since they came here last Wednesday to root for their national athletes competing in the quadrennial games. Earlier in the day, cheering squad members visited Gyeongpodae Beach.