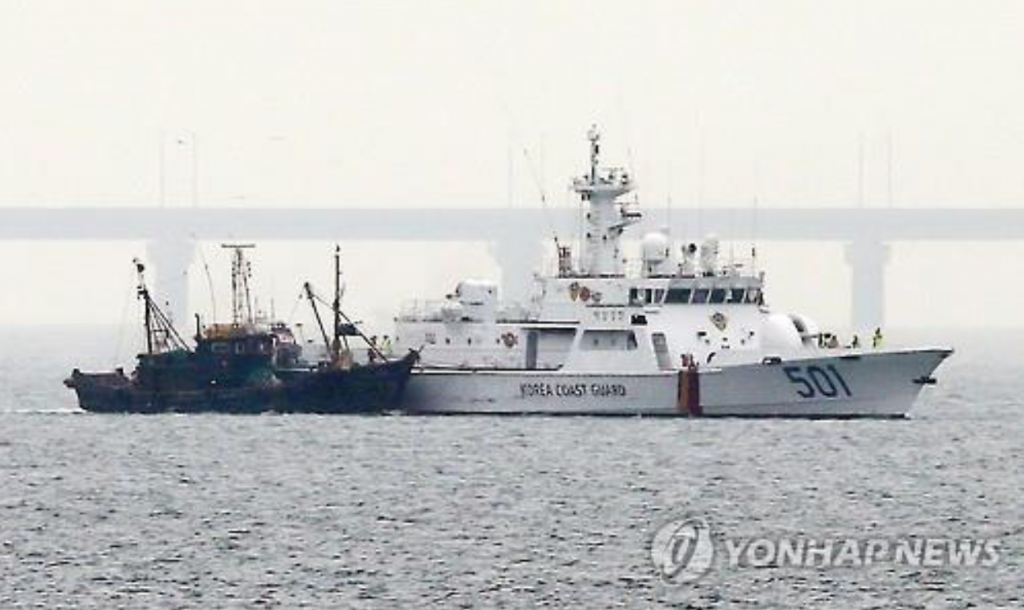 A Chinese fishing boat escorted by a South Korean Coast Guard vessel enters Incheon port, east of Seoul, on June 15, 2016, after being seized by the military policy team for illegal fishing in the neutral waters of the Han River’s estuary. (image: Yonhap)

This marks the North’s first official reaction to South Korea and the UNC’s joint crackdown on Chinese fishing vessels operating in the neutral waters of the Han River’s estuary. The only vessels allowed to operate in the area are those manned by military police officers.

South Korea’s move is aimed at “escalating the intrusion into the hotspot waters in the West Sea of Korea into the inland to secure a chance for military provocation,” the Korean Central News Agency (KCNA) said in an English dispatch.

North Korea warned South Korea and the United States that it has been active in exercising its sovereignty and won’t hesitate to retaliate against any encroachments. The news report said the country’s military is highly vigilant against their “ever-more dangerous military moves.”

On June 10, South Korea and the UNC conducted their first crackdown on Chinese fishing boats illegally operating in the area. The region is a rich fishing ground that has been left largely untouched since the end of the 1950-53 Korean War.

A growing number of Chinese fishing boats have trespassed into the military buffer zone as the peak season for blue crabs has arrived.

Chinese fishermen are presumed to have bought the right to operate in the waters on the North Korean side of the sea demarcation line, widely known as the Northern Limit Line (NLL), but they often intrude into the South Korean side.

North Korean patrol and fishing vessels often show up in the western NLL region, along which the two Koreas fought several bloody sea battles in the past.

Pyongyang does not acknowledge the de facto demarcation line drawn unilaterally by the U.S.-led UNC when the Korean War ended in a cease-fire, not a peace treaty.