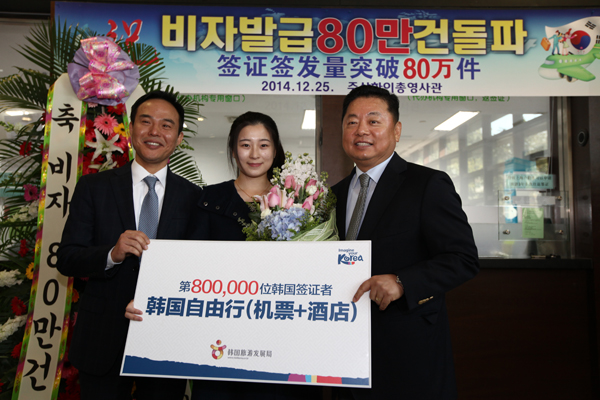 The fever for Korean visas that originated in the eastern part of China is spreading to central and western China. (image: Korean Consulate General in Shanghai)

SEOUL, Dec. 29 (Korea Bizwire) – Korean consulates in China are issuing a record number of Korean visas for Chinese travelers thanks to the Korean wave in China.

According to the Korean Consulate General in Shanghai, it issued 60 percent more visas compared to last year, surpassing the 800,000 mark for the first time for a single diplomatic office.

Among the 800,000 visas issued at the consulate, 96 percent or 770,000 were tourist visas and 43 percent of those who obtained tourist visas for Korea were individual travelers.

The consulate explained that as interest in the K-wave increases, the number of Chinese who seek visas for travel in Korea individually with their family members or colleagues rather than in a group is also growing.

The fever for Korean visas that originated in the eastern part of China is spreading to central and western China. The Korean Consulate General in Wuhan, central Hubei Province, issued 167,000 visas as of December 24, for a 306 percent increase over the previous year.

The Korean consulate in Chengdu, southwestern Sichuan Province, imprinted 113,000 visa stamps in Chinese passports and the consulate in Xian, Shaanxi Province, issued 69,000 visas, up 95 percent and 104 percent respectively over the same period.

According to Kim Jin-wook, deputy consul general at the Korean Consulate General in Wuhan, “This year marks the fourth year since we began operations in December 2010. The volume this year outpaced the total number of visas issued over the previous three years. As there are lots of people who have not been to Korea, demand for visas is expected to keep increasing.”

Thanks to visas that are relatively easy to obtain, lots of Chinese tourists are visiting. However, there are some worries that tourists are increasingly dissatisfied with their trips to Korea.

Koo Sang-chang, consul general in Shanghai, said, “Many countries are competing fiercely to attract Chinese tourists. In order to raise the rates of their satisfaction and revisits to Korea, we need to develop tour programs through which the tourists can enjoy Korea’s authentic taste and experience Korea’s flavor, rather than cheap tour programs full of shopping.”