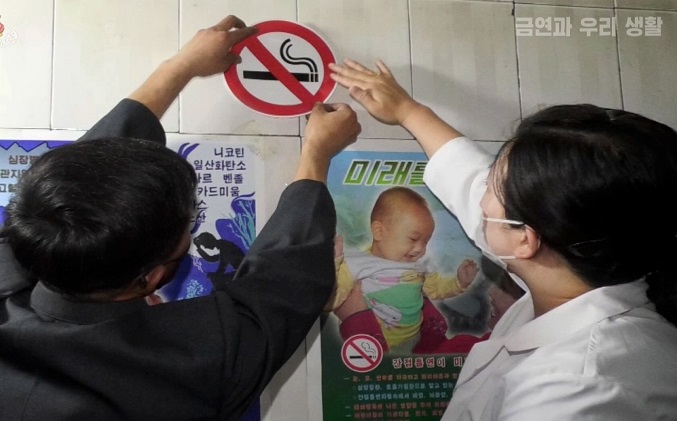 North Korean officials place a nonsmoking sticker on a wall, in this photo captured from the North’s Korean Central TV on May 31, 2020.

Also designated as nonsmoking areas are ideological education centers, nurseries, schools, medical facilities, public transportation and other places prone to fire and explosions such as forests and gas supply stations.

The anti-smoking law applies to foreigners in North Korea, as well as local institutions, factories and individuals, according to the outlet. No-smoking signs will be put up in the designated venues, it said.

“Tightening control over smoking is an important requirement in protecting the lives and health of the people,” the outlet added.

On Nov. 4, North Korea held a meeting of the Presidium of the Supreme People’s Assembly and adopted an anti-smoking law that specifies places and buildings where smoking is prohibited.

The newly adopted law, however, raised questions about whether it would also be applied to North Korean leader Kim Jong-un, known as a heavy smoker. State media frequently runs photos of him carrying cigarettes in public.

After the anti-smoking law was adopted, he was seen next to a cigarette pack and ashtray while presiding over a politburo meeting of the Workers’ Party last month.

Overall smoking rates in North Korea remain high. According to a report, smoking rates especially among men in the North stood at 43.9 percent in 2014.