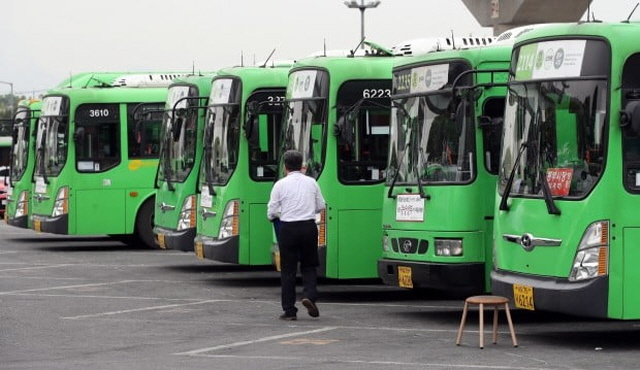 As the new online system comes into place, bus drivers will be required to identify themselves through fingerprint verification and take a DUI test before setting off to engage in daily tasks. (Yonhap)

SEOUL, April 28 (Korea Bizwire) — The Seoul Metropolitan Government announced Monday that all 127 public bus companies in the city have introduced a driving under the influence of alcohol (DUI) online management system.

The system is responsible for recording if and when bus drivers were tested for a DUI, the results, and footage of the moment when the test was conducted on a web server, and sending them to company officials and the city for real-time monitoring.

Prior to the system, bus companies manually checked the DUI status of all drivers and kept the records on a file that was renewed every 12 months. All DUI tests were recorded by CCTV and stored permanently.

This system has led to multiple problems where companies either failed to carry out DUI tests or did not record them on a file.

As the new online system comes into place, bus drivers will be required to identify themselves through fingerprint verification and take a DUI test before setting off to engage in daily tasks.

Bus companies will be in charge of monitoring and managing all related data. The city government will also be able to manage and supervise in real-time.

A camera takes a photo of the bus driver during the DUI test, allowing supervisors to catch not only DUI drivers, but also those who use a substitute to take the test.

If a bus driver fails to take the DUI test before operating hours, or exceeds a blood alcohol content (BAC) of 0.01 percent, a text message is immediately sent to the supervisor for a quick response.

The system also comes with a scheduling program where drivers have to type in their daily bus schedule.

If a driver fails to take the DUI test on the day he or she is scheduled to work, a notification will be sent automatically to the company supervisor.

“We’ve decided to introduce the system in accordance with the new traffic laws with stronger punitive measures against drunk driving,” a city official said.