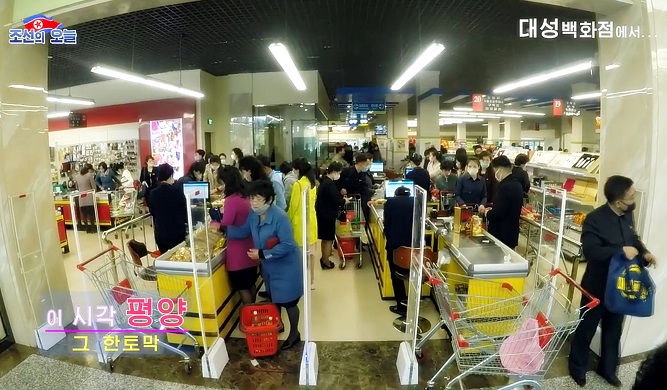 In this image taken from a video aired by North Korea’s propaganda website DPRK Today, North Korean people wearing masks shop at Taesong Department Store in Pyongyang on May 13, 2020. (Yonhap)

SEOUL, Oct. 21 (Korea Bizwire) — North Korea has introduced a payment service that allows people to purchase goods on mobile phones without having to carry around cash or plastic cards, a propaganda outlet said Wednesday.

Meari, one of the North’s propaganda websites, said that a joint research team from the central bank and a government agency in charge of information technology has “developed a mobile payment service and is introducing it in everyday lives.”

“The mobile phone electronics payment system is a new type of transaction method that allows users to transfer payment including service fees or other fees using their smartphones,” it said.

The website stressed that the mobile payment method will also play a significant role in preventing the spread of the virus and other germs.

It did not reveal whether the new system uses near field communication (NFC) technology or a barcode payment method.

Mobile phone use appears to be on the rise in North Korea, though most of the users are presumed to be in its capital Pyongyang.

Experts say that around 6 million mobile phones are being used in North Korea, which represents around a quarter of the total population.

Credit and debit cards are used mainly in Pyongyang, though cash is the major method of payment, according to a 2019 report by the state-run Korea Development Bank.