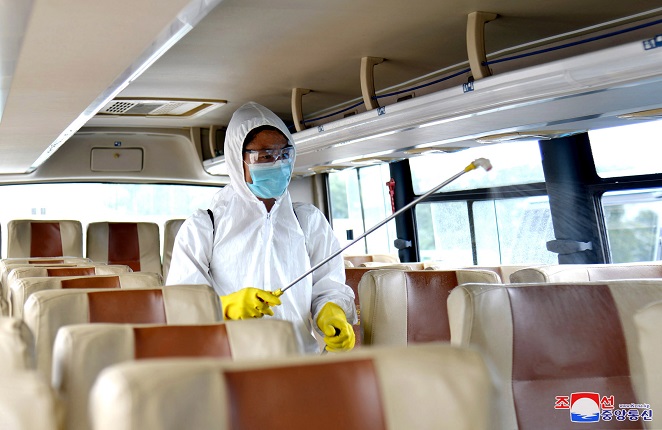 An official disinfects a bus in Pyongyang amid the coronavirus pandemic, in this undated photo released by the North’s official Korean Central News Agency on Sept. 4, 2020. (Yonhap)

Scientists and workers at the 111 Factory in Pyongyang have developed the equipment, which meets global standards, for the first time in the country, the Rodong Sinmun, the organ of the North’s ruling Workers’ Party, said.

Many countries currently use PCR as a standard test for COVID-19 that works by finding the virus’s genetic information, or RNA, in a sample taken from a patient.

The North has conducted PCR testing when reporting to the World Health Organization, but this marks the first time Pyongyang has announced it has developed its own PCR equipment.

North Korea is also tightening coronavirus measures amid the global spread of the contagious lambda and delta variants.

“We are intensifying the struggle to strengthen antivirus measures at all levels to fight against the spread of the viral variants prevalent in many countries and regions,” the Korean Central News Agency said.

The North has claimed to be coronavirus-free but has taken relatively swift and tough measures against the pandemic, such as imposing strict border controls since early last year.