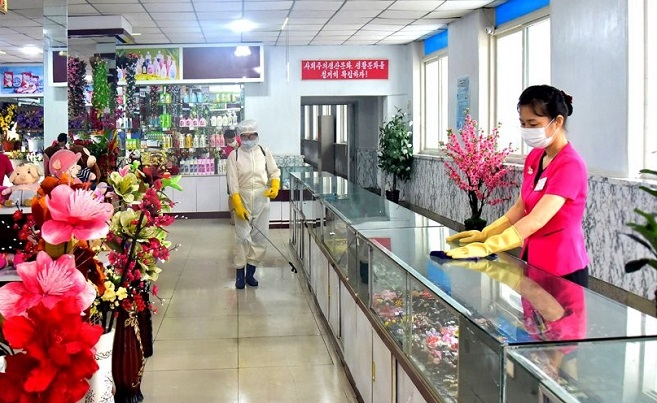 In this file photo released by North Korea’s official Korean Central News Agency on Aug. 8, 2022, store workers disinfect a shop in Pyongyang as the North steps up efforts to prevent the spread of COVID-19. (Yonhap)

The number of markets in the reclusive North has increased to 414 this year, up slightly from 411 in 2016, according to analysis by Hong Min, director of the North Korea Research Division at the Korea Institute for National Unification.

The research, conducted using satellite imagery and other data, shows the North has renovated and enlarged 38 of its markets while expanding another 26 at a different location during the same period.

Another expert pointed out North Korean vendors in the marketplace appear to be experiencing economic challenges due to global sanctions and border closure from the coronavirus pandemic.

“The North has shut down its markets in Pyongyang and many other regions after announcing its first COVID-19 outbreak in May this year,” Cha Moon-Seok, professor at the National Institute for Unification Education, said in his research.

“There also appears to be resistance from vendors, as the amount of tax for each stall has almost doubled since 2017,” he added.

North Korea has both official marketplaces that are authorized by the government and unofficial private markets, known as “jangmadang.”