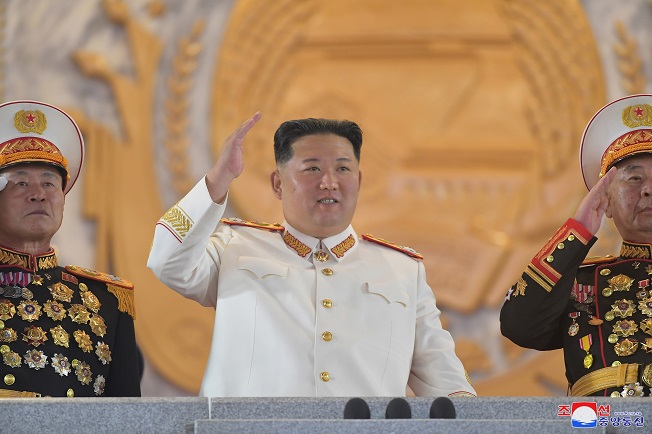 North Korean leader waves during a military parade in Pyongyang on April 25, 2022, in this photo released by the North’s official Korean Central News Agency. (Yonhap)

SEOUL, April 26 (Korea Bizwire) — Beyond the typical display of the newest strategic weapons and hard-bitten warriors at this week’s military parade, North Korean leader Kim Jong-un made a more menacing move: the threat to use nuclear arms in case of encroachment on his country’s “fundamental rights.”

During Monday’s parade marking the 90th founding anniversary of the Korean People’s Revolutionary Army (KPRA), Kim signaled an apparent shift in his nuclear doctrine, which had mostly been seen as having a narrow range of uses for nuclear weapons, like deterring a war.

Kim’s use of the ill-defined expression, “fundamental rights,” could represent a widening of the scope of his regime’s possible nuclear use and raise the odds of North Korean nuclear attacks in crisis scenarios, analysts said.

“Leader Kim appears to have inched toward a more aggressive nuclear doctrine given the North’s tendency to define its ‘fundamental rights’ in broad terms,” Park Won-gon, a professor of North Korean studies at Ewha Womans University, said.

The North has long suggested a focus, at least ostensibly, on using its nukes for the purpose of self-defense in the form of deterring aggression, launching retaliatory strikes or repelling enemy attacks.

Signs of the North’s apparent pivot to an aggressive nuclear posture were detected earlier this month when Kim Yo-jong, the North Korean leader’s powerful sister, laid out a scenario of the North using its nuclear force to “take initiative at the outset of war” and prevent protracted hostilities.

Her remarks raised the prospects of Pyongyang launching nuclear preemptive strikes even in a conventional war against hostile forces. 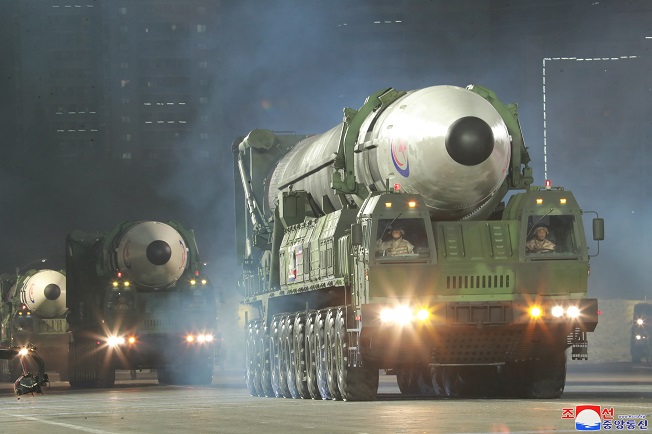 A new Hwasong-17 missile is displayed during a military parade at Kim Il-sung Square in Pyongyang on April 25, 2022, as North Korea marked the 90th anniversary of the founding of its army with North Korean leader Kim Jong-un in attendance, in this photo released the next day by the North’s official Korean Central News Agency. (Yonhap)

In line with that push, the North conducted a test-firing of a tactical guided weapon that it said improved the efficiency of tactical nuclear operations.

Among the weapons was the Hwasong-17 intercontinental ballistic missile (ICBM) that the North claimed to have tested on March 24 in a launch that ended its yearslong self-imposed moratorium on nuclear and ICBM tests. 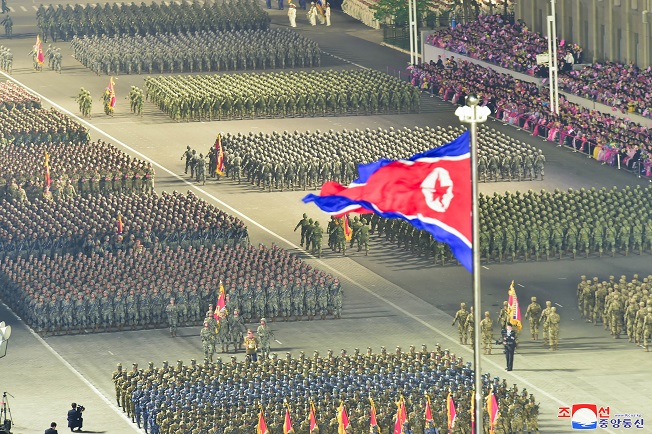 North Korean soldiers take part in a military parade, attended by North Korean leader Kim Jong-un, at Kim Il-sung Square in Pyongyang on April 25, 2022, to mark the 90th anniversary of the founding of its army, in this photo released the next day by the North’s official Korean Central News Agency. (Yonhap)

The Hwasong-17 is known to carry multiple warheads, potentially including decoys, and can travel some 15,000 kilometers — a range that can strike the whole of the continental U.S.

The North also unveiled what appears to be a new submarine-launched ballistic missile (SLBM). The length of its warhead appeared to be about 1 meter longer than an SLBM showcased during a military parade in January last year.

An SLBM is another formidable asset capable of launching surprise retaliatory nuclear attacks.

A small-size SLBM was also among the weapons on display – an indication that the North is working on diversifying its SLBM fleet for various battle scenarios. In October last year, the North claimed to have successfully launched the “mini-SLBM.”