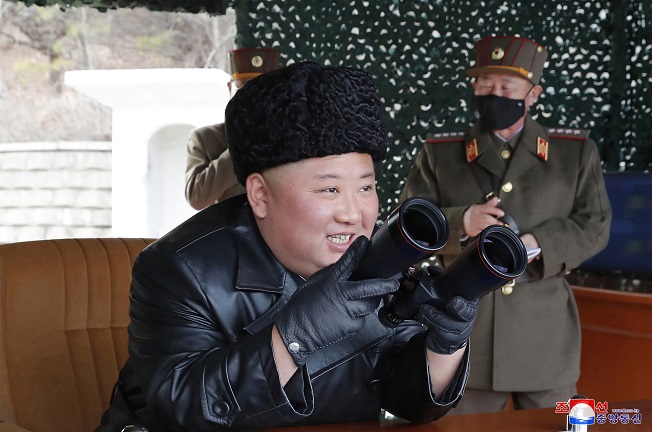 South Korea has been on high alert after Kim Yo-jong, sister of North Korean leader Kim Jong-un, vowed Saturday to take a next step to punish the South for failing to stop such leafleting, saying she has entrusted “the General Staff of our army” to “decisively carry out the next action.”

The General Staff of the Korean People’s Army is known to have masterminded two deadly attacks on the South in 2010 — the sinking of the South Korean warship Cheonan, which killed 46 sailors, and the artillery attacks on the border island of Yeonpyeong, which left four people dead.

Experts said the North is expected to take action, including militarily, as Kim Yo-jong’s threat was not only carried by state media outlets designed for outside audiences, but also by the Rodong Sinmun newspaper and other outlets for domestic audiences.

But the communist nation is not expected to go as far as conducting major provocations, such as direct strikes on the South like the 2010 attacks, launching an intercontinental ballistic missile or carrying out a nuclear test.

“As Kim Yo-jong already said, the North Korean authorities involved with inter-Korean affairs will take the next step, and since the statement was published in Rodong Sinmun, which is intended for the domestic audience, they will take military action.”

“But it is unlikely it will be a major military provocation. If the leafleting campaign continues again, the first step the North will likely take is to issue a harshly worded statement warning that they will respond by immediately firing anti-aircraft guns,” Yang said.

In 2014, the North tried to shoot down leaflet-carrying balloons, triggering an exchange of fire with the South. 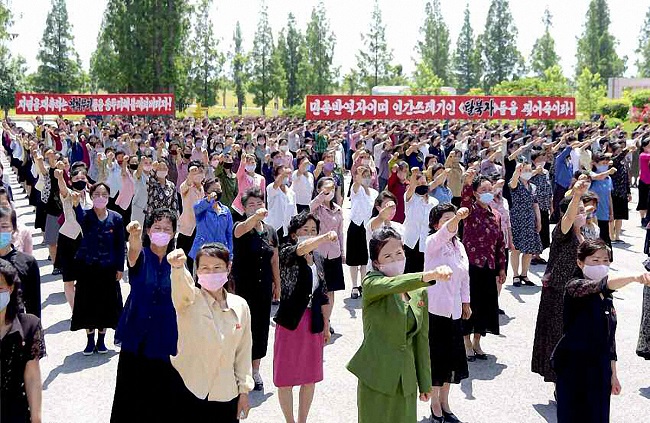 Officials and members of North Korean women’s unions stage a mass rally outside a museum in Sinchon, North Korea’s South Hwanghae Province, on June 9, 2020, to denounce South Korean authorities and North Korean defectors for what they say are anti-North Korean acts, in this photo released by the North’s official Korean Central News Agency on June 10.

Professor Lim Eul-chul at the Institute for Far East Studies at Kyungnam University also said the North may take military action to escalate tensions, such as using anti-aircraft gun if defector groups attempt once again to send leaflets to the North.

“The level of the North’s provocation will depend on the action our government takes. The North also does not want to take military action. By declaring it will take the ‘next step’ it is using a high level of psychological warfare to create tension and get what they want,” he said.

Lim said the North could remove covers from coastal artillery guns on the west coast in a gesture to show they are getting ready to open fire so as to further escalate tensions.

“This might be one way for them to create military tension,” he said.

Lim, however, said that any deadly attacks, such as the sinking of the Cheonan and the artillery attacks on Yeonpyeong, are unlikely.

“That would only happen when they are ready to go to war,” he said.

“Although inter-Korean relations are unstable now, the two leaders have held three summits and the two Koreas have engaged in more discussions than in any other times.”

Lim said that the first action the North is expected to take will be about the inter-Korean liaison office in the North’s border city of Kaesong. Kim Yo-jong said Saturday that before long, the South will see a “tragic scene” of the office “completely collapsed.”

“We first need to keep a close eye on it,” Lim said. “The North may completely abolish the office depending on how our government responds.”

As a reason for the North’s threatening moves against the South, experts cited growing economic difficulties worsened by the coronavirus pandemic amid international sanctions.

Escalating tensions with the outside world is one of the ways to divert public attention from domestic difficulties, they said.

“The recent move reflects a comprehensive list of reasons including the North’s accumulated fatigue from the coronavirus, international sanctions and growing public grievances,” Yang said. 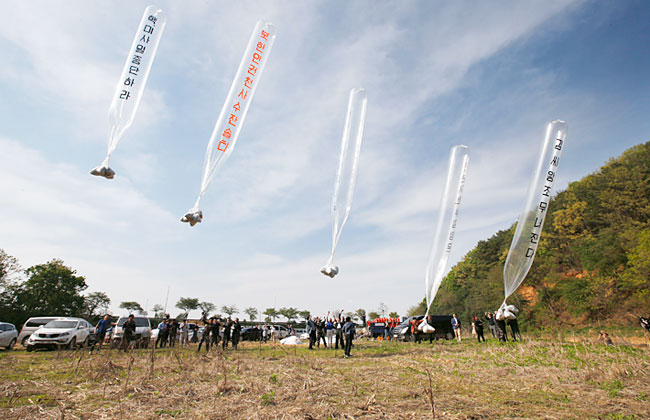 Members of Fighters for Free North Korea, an organization of defectors from North Korea, send balloons carrying anti-North leaflets across the border from the South Korean border city of Paju, in this file photo dated April 2, 2016. (Yonhap)

Defector groups and other activists have occasionally sent a large number of leaflets via giant balloons sharply criticizing the communist regime and its leader.

These were often flown with one-dollar bills, USB memory sticks and other items to get more North Koreans to pick up the leaflets.

The South Korean government has advised against sending such leaflets, citing concerns about the safety of residents in the regions where the leaflet-carrying balloons are launched because the North could take retaliatory military action on the areas.

Defector groups have ignored such appeals, citing their right to freedom of expression.

The North condemned such leafleting as running counter to two key inter-Korean agreements signed by their leaders, the Panmunjom Declaration of April 2018 and the following military agreement in September the same year.

Kim Yo-jong has warned the North will abolish an inter-Korean liaison office, stressing such actions will be the first in a series of steps against South Korea, vowing to turn its work toward the South “into the one against an enemy.”

The North also threatened to scrap a military tension-reduction deal signed in 2018 and dismantle a now-shuttered industrial park in the North’s border city of Kaesong, unless South Korea takes action against such leaflets.

The North has since refused to answer calls from the South through inter-Korean communication channels including military hotlines, marking the first time that Pyongyang has not responded since the hotlines were restored in 2018.

North Korea has continued to publish harsh statements despite a series of actions taken by the South Korean government, including filing a complaint with the police against two defector groups involved in the leaflet campaign and a warning from the presidential office Cheong Wa Dae saying it will crack down on the flying of leaflet balloons

“We must not forget North Korea is a country that prioritizes the Supreme Leader above all else. They will not tolerate such behavior that insults the leader,” Yang said.