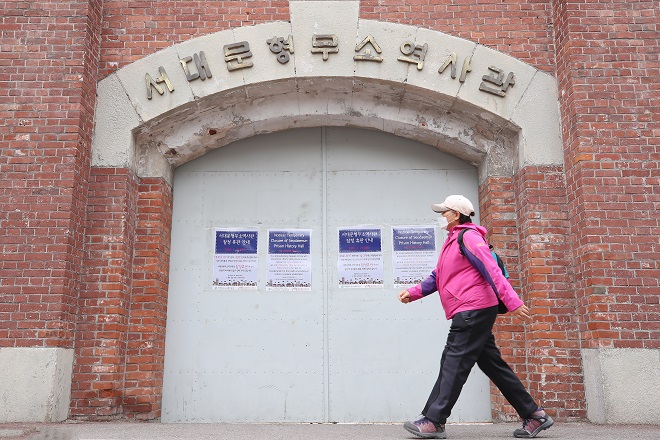 This March 1, 2020, photo shows Seodaemun Prison History Hall in central Seoul closed down due to the coronavirus pandemic. (Yonhap)

The national holiday is usually observed with large ceremonies, processions and performances remembering the months of popular uprisings against Japan’s colonial rule (1910-45), which started in Seoul on March 1, 1919.

About 2 million people participated in the protests across the county and more than 7,500 were killed, according to historians.

The government held its annual national ceremony to mark the anniversary at Tapgol Park in central Seoul, known as the birthplace of the historic movement.

Under tight COVID-19 restrictions, the ceremony was held in a small scale as it was last year, with only about 50 people, including President Moon Jae-in and first lady Kim Jung-sook, attending.

Local governments had their own small ceremonies to commemorate the anniversary and award people of national merit.

But most other commemorative events have been either canceled or turned online this year again.

The museum will allow only 150 visitors per hour to tour the prison complex, where many independence fighters, including leaders of the March 1 movement, were detained, tortured and killed.

The city government of Seoul canceled its official bell-ringing ceremony and curtailed other events.

The district office of Jongno, where the March 1 march started, also suspended its tours of main venues of the protests in the city center for the second consecutive year. 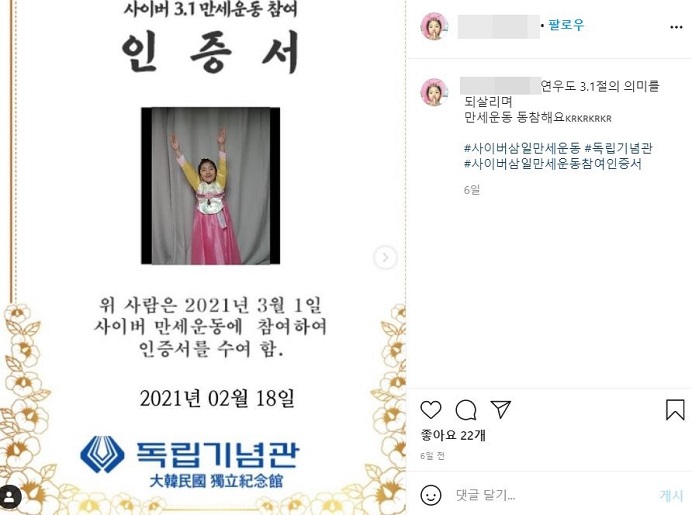 The state-run Independence Hall of Korea has organized a campaign encouraging citizens to post on social media photos of themselves or others raising hands, holding up the national flag and shouting “Hurray! Korean Independence,” the slogan of the March 1 resistance movement.

One of them is Bae Moon-hee, a 42-year-old mother, who posted a picture of her 8-year-old daughter.

“I took part in this online campaign as opportunities to participate in in-person events are limited. It was a meaningful time as we tried to sense the longing for independence of that day while we shouted ‘Hurray!’” she said.

The group founded by Ahn Chang-ho, a independence movement leader, was to hold a March 1 ceremony with its members and citizens using the video app Zoom.

Kookhakwon, a nongovernmental organization promoting Korean traditional culture, was to hold an event on YouTube, which will include the reciting of the March 1 Declaration of Independence and an independence movement-themed flash mob.