Activists demand the abolishment of anti-abortion laws in front of the National Assembly in Seoul on Oct. 7, 2020. (Yonhap)

SEOUL, Oct. 7 (Korea Bizwire) — The government made public its plan Wednesday to revise laws to allow abortion until the 14th week of pregnancy, reigniting a heated debate over restricting women’s abortion rights.

The revisions also conditionally allow abortion until the 24th week of pregnancy based on social, economic and health concerns.

The government said the changes to the Criminal Act and the Mother and Child Health Act were made in close consultation with medical and legal experts and as a follow-up to a Constitutional Court ruling in April last year.

The court ruled that two provisions of the Criminal Act that ban all abortion, at any stage of pregnancy, are unconstitutional as they severely violate women’s right to choose, and it gave the National Assembly until the end of this year to revise the law.

Currently, abortion is a crime punishable by up to three years in prison and is only legally allowed in case of rape or when carrying out the pregnancy is likely to put the expectant mother’s health at great risk.

The Justice Ministry said in a joint release by the Ministry of Health and Welfare and the Ministry of Food and Drug Safety that no criminal charges should be filed for abortion until the 14th week of pregnancy under the revisions.

Until the 24th week into pregnancy, abortion is still possible under extenuating circumstances, such as rape, as well as for social and economic reasons. In the latter cases, a woman should go through mandatory counseling and a 24-hour “consideration period.”

The clause of getting consent from a partner for abortion was deleted out of concern that it violates a woman’s right to choose.

The public will have around 40 days to submit their opinions about the revisions before the revisions are sent to the National Assembly for approval.

Revising, not abolishing, the anti-abortion law, however, is likely to invite strong protest from women’s rights advocacy groups.

In August, the Committee of Gender Equality under the Ministry of Justice recommended that the ministry recognize women’s right to choose as a basic human right and repeal the decades-old laws.

“Women’s voices and experiences should be actively considered (in policymaking),” the committee said in a press release. It added that the right to choose is guaranteed “by the Constitution, the Framework Act of Gender Equality and the U.N. Convention on the Elimination of All Forms of Discrimination against Women.”

According to the two articles of the country’s Criminal Act, which was made into law in 1953, a woman who “procures her own miscarriage through the use of drugs or other means” shall be punished by imprisonment of up to one year or by a fine of up to 2 million won (US$1,685). 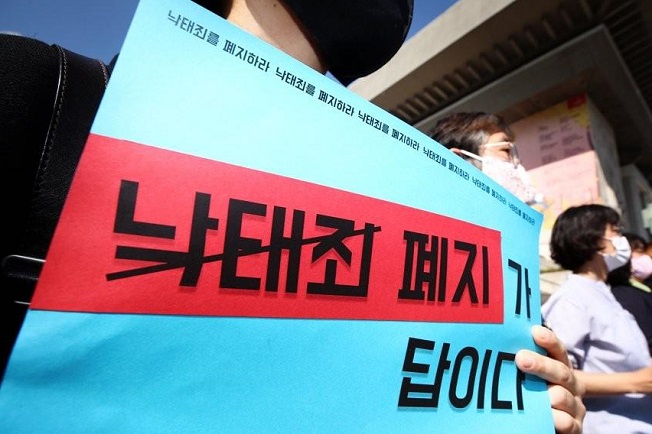 Women’s rights activists have been arduously calling for the abolishment of the act, arguing that making it a criminal offense only worsens situations in which a medical procedure to terminate a pregnancy takes place anyway and that many women face greater health risks during the illegal process.

On Wednesday, both pro-life and pro-choice groups held separate protests in front of the National Assembly for what they considered as excessive or lack of restraints on abortion.

“Since the Constitutional Court’s ruling, there has been no indiscriminate abortion taking place, contrary to concerns,” Park Su-jin, a lawyer at Duksu Law Offices in Seoul, said.

“The government’s plan to punish abortion after the 24th week of pregnancy is like turning back the clock.”

Seo Ji-hyun, a prosecutor and a gender equality adviser for the justice ministry, also opposed allowing abortion conditional to how far along a woman is in her pregnancy, and called the planned changes “a revival of the anti-abortion law.”

“Abolishing the anti-abortion law is not the same as encouraging abortion. There is not a single woman who would not get an abortion out of fear of punishment. There are only women who suffer from illegal abortions,” she wrote on her Facebook page.

“The toothless anti-abortion law should be replaced with effective policies in order to save precious lives, and that’s what we need,” she said.

Meanwhile Kim Cheon-soo, a law professor at Sungkyunkwan University in Seoul, claimed that the revisions were perfectly in line with the Constitutional Court’s ruling.

He opposed the complete abolition of the law, saying that abortion after the 24th week of pregnancy was “tantamount to legalizing the murder of an unborn child.”

“The revisions excessively expanded the criteria under which abortions are permitted. Given most abortions take place within 12 weeks of pregnancy, the revisions will practically allow all abortions,” said a group of 174 female professors around the country in a statement.

“It is a serious act that completely disregards a fetus’ right to life.”

Politicians have also expressed mixed opinions depending on where they fit into the ideological spectrum. The ruling Democratic Party (DP) took a cautious approach considering the sensitivity of the matter.

“This has been a difficult issue for a long time that generates highly divisive voices,” Hur Young, the party’s spokesman, said. “The government should gather sufficient opinions from all walks of life before sending it the National Assembly,” he said.

The main opposition People Power Party (PPP) did not issue an official statement on the matter.