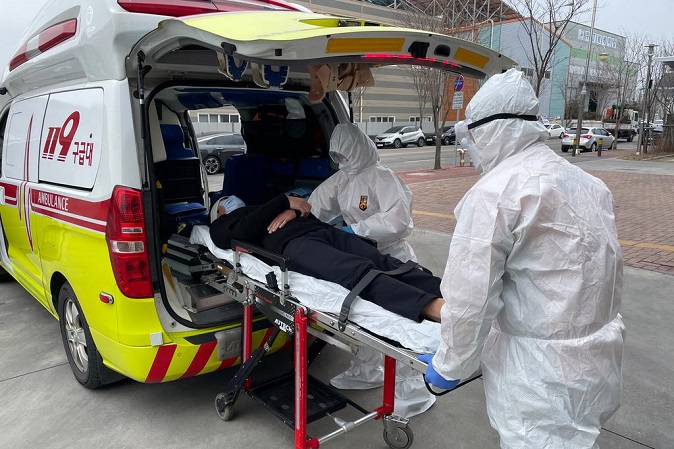 This file photo, provided by a fire station in the southwestern city of Gwangju on Feb. 9, 2022, shows officials transporting a patient to a hospital.

SEOUL, June 9 (Korea Bizwire) — South Korea said Thursday it will apply artificial intelligence and other advanced technologies to the traffic system to try to reduce the number of traffic-related deaths.

The move is part of the transport ministry’s comprehensive five-year basic plan of the national traffic safety, which calls for cutting traffic deaths by 50 percent by 2027 from the 2020 level.

South Korea’s mortality rate from traffic accidents stood at 6.5 per 100,000 people, compared with an average 5.2 for the Organization for Economic Cooperation and Development, a group of 36 mostly rich and advanced nations.

“We will redouble our efforts to prevent traffic-related deaths so as to achieve the United Nation’s recommended goal of preventing at least 50 percent of traffic deaths and injuries by 2030 at an early date,” the ministry said in a release.

For the goal, the government plans to advance the country’s traffic system by maximizing information and communications technology, big data and other cutting-edge technologies.

It also plans to push for a conditional drivers’ license system for senior citizens, as the country is widely expected to become a super-aged society in 2025.