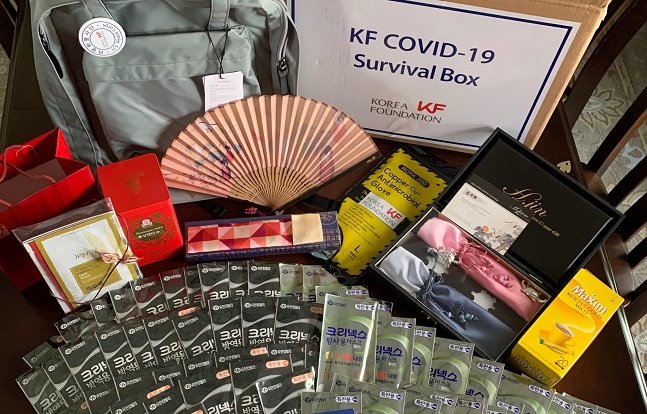 SEOUL, Nov. 23 (Korea Bizwire) — A group of former American Peace Corps volunteers who devoted their youth in South Korea several decades ago were moved to tears by a gift box sent by South Korea during the COVID-19 pandemic.

The Washington Office of the Korea Foundation sent a package labeled ‘COVID-19 Survival Box’ to the 514 Americans who served in the past as Peace Corps volunteers in South Korea.

After being deeply impressed by the survival box that contains 100 masks and other items, including anti-bacteria gloves, some recipients sent letters of appreciation to the foundation.

For the former Peace Corps volunteers who are now elderly and vulnerable to COVID-19, the survival box is a gift that is more precious than any other, particularly given that the number of new COVID-19 patients is increasing by more than 100,000 per day in the U.S.

Without disclosing his name, a former Peace Corps volunteer who taught students in Gwangju during the period from 1971 to 1974, said in a letter he sent to the foundation, “I’ll forever appreciate the generosity of the South Korean government and its people.”

“There are many cases where former Peace Corps volunteers contacted us saying that they were surprised and feel rewarded by the fact that South Korea, which was a third-world country with poor public health condition in 1960s, has now become one of leading countries whose response to the COVID-19 is held up as an example for other nations, including the U.S.,” the Korea Foundation said.