“We had a solid tournament. If we’d been knocked out of the group stage, it would’ve been a different story. However, the fact of the matter is we finished as the runner-up. In order to win in the future and to keep improving, we have to make changes where necessary. We won’t improve at all if we grow satisfied too easily. We must not be content with finishing in second place.”

“After finishing second at the Asian Cup, we received a hero’s welcome here. We accomplished a great deal over three weeks in Australia, and I am sure the players know that they can get a lot of love from the fans if they work hard. But at the same time, we can also lose a lot over a short period of time. That’s why it’s important to play well this time.”

“The national team is for the chosen ones. I know some players have played some good football of late, but I don’t think it’s appropriate to open the doors to the national team for such players. This is a special place, and it should never be so easy to make the team.” 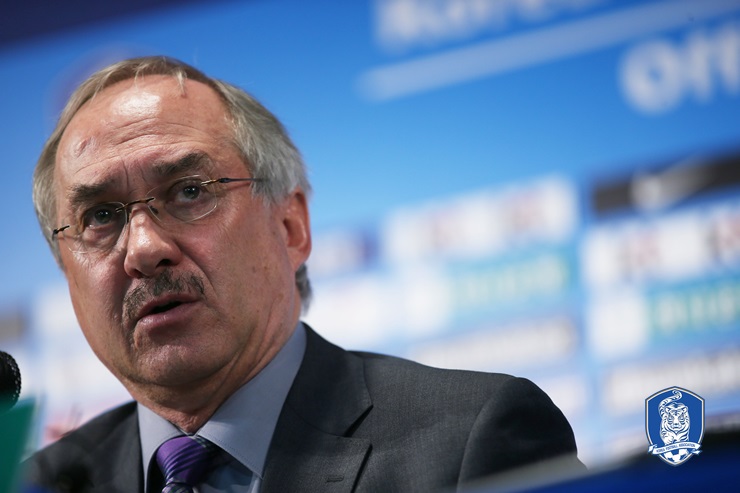 Uli Stielike made the statement while announcing his 23-man roster for two March friendlies at home, first against Uzbekistan on March 27 and then versus New Zealand four days later. (image: KFA)

SEOUL, March 17 (Korea  Bizwire) – South Korea may have exceeded expectations by finishing second at the AFC Asian Cup two months ago in Australia, but the team has to keep making changes to improve for the future, its head coach said Tuesday.

Uli Stielike made the statement while announcing his 23-man roster for two March friendlies at home, first against Uzbekistan on March 27 and then versus New Zealand four days later. He replaced six players from the team that competed at the Asian Cup in January, while bringing in a pair of international rookies in Lee Jae-sung and Kim Eun-sun, both midfielders.

Stielike said he didn’t see the need to carry out a major overhaul of the team but stressed that it didn’t mean the team could afford to stay content.

The two upcoming matches will be South Korea’s first international contests since the Asian Cup. Stielike admitted these March contests may not seem important to some people, but they carry much significance for his squad.

Stielike has attended some early season matches in the K League Classic, the top-tier domestic competition, and he said he will keep looking for new faces to add to his squad.