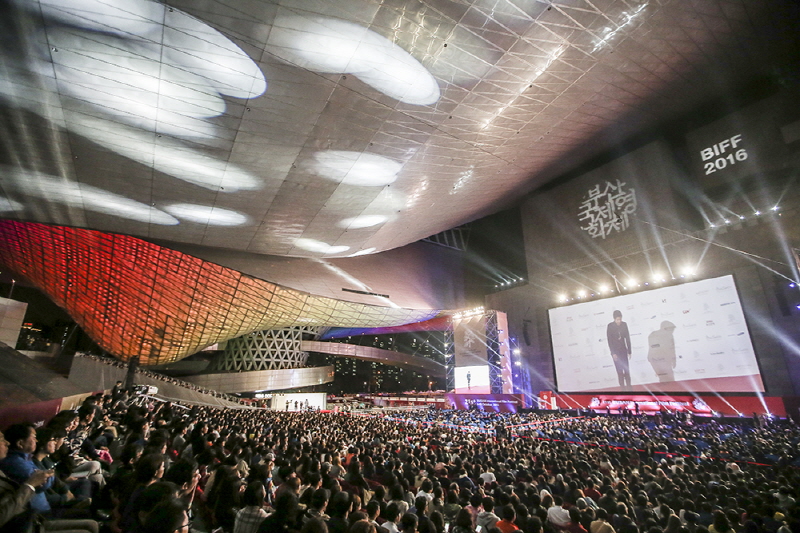 SEOUL, Sept. 7 (Korea Bizwire) — For many Korean film reporters, autumn brings with it the opening of an international film festival held annually in the southern port city of Busan.

The Busan International Film Festival (BIFF) provides a rare chance for them to see the latest movies from prominent Asian directors before they arrive in local cinema houses and to mingle with other reporters and film industry people from Korea and abroad in a festive atmosphere.

The mood for last year’s BIFF, however, was largely sedate, with major movie stars and filmmakers not seen on the red carpet, as the film industry and the sponsoring city of Busan were locked in strife over allegations of “municipal interference” in the festival’s artistic freedom.

The festival then saw a 27 percent drop in the number of visitors and experienced a major dent in its status as Asia’s premier film festival.

“BIFF was one of the main victims of the anti-constitutional ‘blacklist’ policy of the Park Geun-hye government,” Kang Soo-youn, the BIFF executive director, said in a statement released July 21.

Blacklisting anti-government artists and banning them from state financial support was one of the main triggers of massive protests against the government last year. Park was impeached and removed from office over a massive corruption scandal and liberal President Moon Jae-in was elected and took office in May.

“The status of BIFF has been seriously hurt in the political turmoil that has occurred in the past three years, and the Busan Mayor Suh Byoung-soo has to apologize to Busan citizens and filmmakers and the former BIFF executive director over a series of happenings surrounding the festival,” the statement said.

With about a month to go before the opening of the 22nd festival, preparations for the event have apparently been going smoothly with no major delays.

Will BIFF be able to quickly mend fences with the Busan metropolitan government and get back on track under the Moon government? Unfortunately, the circumstances of this year’s event are not that rosy. Many in and out of the film industry worry that this year could be the same as last year unless the current stalemate between the two sides is resolved.

Led by the Directors Guild of Korea, which represents about 300 movie directors, three film industry associations recently declared they would boycott the event if the Busan mayor did not apologize for his role in the feud and reinstate the ousted festival director, Lee Yong-kwan. But the mayor has ignored the mounting calls for an apology, and Lee has not returned to his former position.

The current feud dates back to 2014 when then-festival director Lee pushed for the screening of a controversial documentary in spite of opposition from Busan Mayor and then-BIFF organizing committee chairman Suh. The Busan metropolitan government funds around half of the festival’s annual budget.

The film “The Truth Shall Not Sink with Sewol,” also known as “Diving Bell,” criticized the Park administration’s handling of the Sewol ferry sinking that claimed more than 300 lives, mostly teenage students, in April that year.

The Busan metropolitan government has since conducted an unprecedented audit into Lee and other executive committee members, and cut about half of its annual funding for the festival in what some filmmakers claimed as “political retaliation” for artistic expression.

Lee left the position after being given a six-month jail sentence suspended for two years for embezzlement of festival funds by the Busan District Court. The sentence was reduced to a 5 million-won (US$4,425) fine in the appellate court. He instantly appealed the ruling, however. After his departure, actress Kang, who had been co-festival director since 2015, became the sole executive director.

The tense standoff relaxed a little when Kim Dong-ho, the festival’s founding director, took over the chairmanship of its organizing committee from the Busan mayor after both sides agreed to amend its bylaws to include a clause that guarantees its artistic freedom in July. But four of the country’s nine film industry groups boycotted the 21st festival demanding more measures to ensure the festival’s independence from any political influence, measures to recover the honor of the former director and an apology from the Busan mayor. The 21st BIFF was held without a resolution to any of those demands. 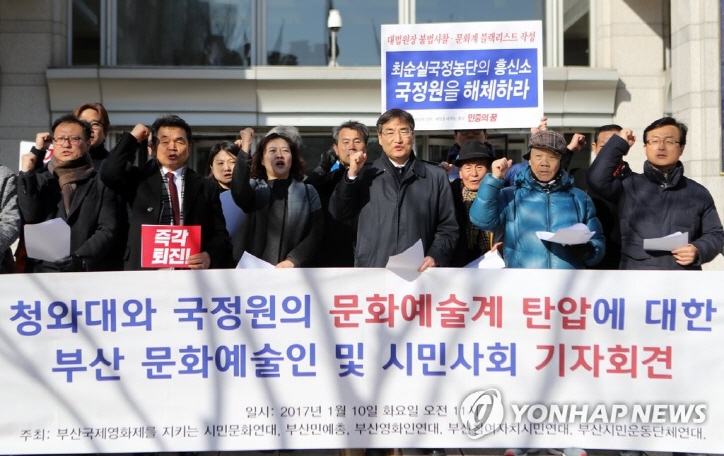 Members of a network of Busan-based civic groups working to support BIFF chant a slogan during a news conference in front of Busan City Hall on Jan. 10, 2017, calling for the punishment of those responsible for the Park Geun-hye government’s “blacklist” of anti-government cultural figures. (image: Yonhap)

After a year, the festival is now suffering from deepening internal strife and a leadership crisis in addition to the protracted “artistic freedom” issue.

The festival’s chief programmer and executive deputy director Kim Ji-seok died of a heart attack during his business trip to the Cannes Film Festival in May. Hong Hyo-sook was named to fill Kim’s vacancy the following month but resigned from the post over allegations of ethical lapses. In late July, four BIFF officials left their jobs en masse in protest of festival director Kang Soo-youn’s alleged attempt to cover up the allegations.

The worst fallout from the protracted feud is the forthcoming resignation of the two main festival leaders who shouldered the heavy task of normalizing the festival.

Kim Dong-ho and Kang announced early last month that they will resign from their posts when this year’s edition wraps up Oct. 21 “to bear the responsibility for the recent series of happenings.”

Their resignation offer followed a statement from a group of BIFF staff that criticized the two leaders for being dogmatic and not fully communicating with staff. The two were also criticized for having been soft on the Busan mayor “who ousted former festival director Lee.”

The statement did not include a demand for the pair’s resignations, but, according to film industry sources, there have been mounting calls for them to go. The festival will have to appoint new leaders and discuss its future path when the two leave as planned next month.

Some relief from the present stalemate has been provided by the Moon government moving to restore the curtailed state financial support for the festival.

The government has proposed a budget of 4 billion won for supporting international film festivals, up 1.5 billion won from last year’s 2.5 billion won, as part of its efforts to normalize cultural programs and events “unjustly” scaled down under the former administration for political reasons.

A large part of the budget, if approved by parliament, is expected to go to the Busan festival in consideration of its status as one of the top film festivals in Asia.

The National Assembly is also moving quickly to help normalize BIFF by hosting open forums to discuss ways to resolve the crisis.

A forum hosted by Rep. Chun Jae-soo of the ruling Democratic Party on June 22 was attended by a large number of government officials, including Culture, Sports and Tourism Minister Do Jong-whan, as well as legislators and filmmakers.

Participants of the forum, in unison, raised the need to normalize the Busan festival as soon as possible and to restore the honor of the disgraced former festival director.

Choi Yong-bae, the executive director of the Bucheon International Fantastic Film Festival (BiFan), said during the forum that BiFan has also suffered from conflicts with its sponsor, the Bucheon city government.

“Many filmmakers did not come to the festival after its former director Kim Hong-joon was dismissed from his position in the dispute,” Choi said. “It is hard for a film festival that filmmakers disagree with to grow anymore. This is what BIFF has to solve.”