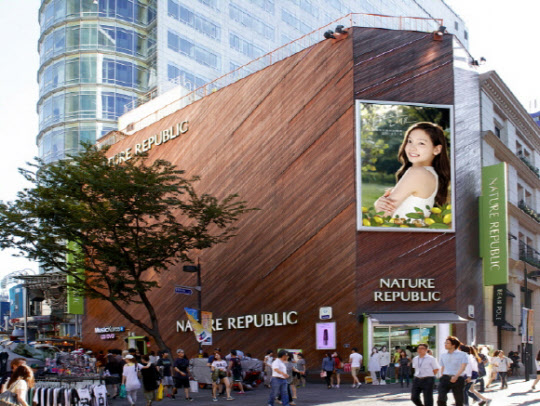 If you walk along Myeong-dong 8th Street, the main shopping area in Myeong-dong, after getting out from Exit 6 of Myeong-dong subway station, you will easily see a four-story building with wooden exterior. (image: Nature Republic)

SEOUL, June 2 (Korea Bizwire) – “When we launched a new cosmetic brand back in 2009, we thought hard about what to do to promote our Nature Republic brand most effectively. We ended up setting up shop in the middle of the Myeong-dong (or Myung-dong) commercial zone as the best-possible way to raise our profile quickly.” This is what a Nature Republic official said when asked why his company selected the current location despite the high rental price.

If you walk along Myeong-dong 8th Street, the main shopping area in Myeong-dong, after getting out from Exit 6 of Myeong-dong subway station, you will easily see a four-story building with wooden exterior. This is Nature Republic’s Myeong-dong World store that boasts the highest land price for 11 consecutive years.

According to “2014 Public Land Price Notice” published by the Ministry of Land, Infrastructure, and Transportation on May 29, the price for the land plot on which the Nature Republic building is located was 77 million won per square meter, up 10 percent from last year. In terms of pyong (3.3 square meters), this is 254.55 million won per pyong. Based on this price, the land’s value (169.3 square meters) is estimated at 13,036 million won.

As is well known, Myeong-dong today is a favorite tourist spot for Chinese and Japanese visitors. Since 2010, the area has become a magnet for fashion and cosmetic brands of Korea and elsewhere. Nature Republic also opened a location in March 2009 and it has become the company’s flagship store ever since. Thanks to its strategic move, Nature Republic is now a famous brand in Asia and beyond. The company has opened overseas stores in 14 countries.

Currently the Nature Republic Myeong-dong store has three sale floors including cosmetics for locals on the lobby floor and cosmetics for foreign visitors on the second. The third floor sells music CDs.

An employee at the Myeong-dong World store said, “Given its proximity to the subway station and the central location within Myung-dong, we have so many foreign customers coming here to buy cosmetic items and music CDs. Unusually in Myeong-dong, we are open until 12 midnight.” The company pays 250 million won a month for rent, with the upfront deposit of 5 billion won.