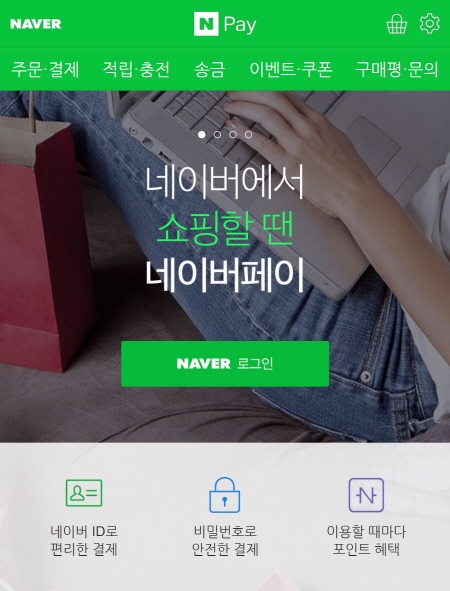 Naver Pay, available starting Thursday, allows users to pay for an item online only with their Naver IDs, a stark contrast to existing mobile payment tools offered by other financial and IT firms. (image: Naver)

Naver Pay, available starting Thursday, allows users to pay for an item online only with their Naver IDs, a stark contrast to existing mobile payment tools offered by other financial and IT firms here that usually require multiple procedures for ID verification, the company said.

This is possible once users have bank account or credit card details registered with Naver.

Apart from the instant payment service, the tool also offers a tracking system for deliveries and refunds, since Naver Pay has integrated Naver’s existing check-out platform, it added.

The launch of the mobile payment platform came as Naver feels the need to strengthen its mobile-related business, given spiking demand in the country, where over 75 percent of the population owns a smartphone.

Naver, the operator of its namesake search engine, has been the most successful venture in the country on the back of its Internet-oriented business models, such as the portal and blogs, from which it generates most of its advertising revenue.

But as the growing e-commerce market begins to break down the barrier between online and offline purchases, the mobile payment platform has emerged as a key growth driver for local IT companies, also known as fintech businesses.

Daum Kakao, the operator of the most popular messaging app KakaoTalk and Naver’s archrival, has released a few mobile payment tools of its own: KakaoPay and BankWalletKakao, making an aggressive move to take the reins in the sector.

Naver is also expected to vie with Samsung Electronics in the battle for the mobile payment market, as the tech giant is scheduled to launch Samsung Pay in September.

Naver said it has partnered up with 14 local banks and credit card firms to provide the payment service, and plans to add more.

Naver currently has 53,000 member stores that are contracted to provide customers with Naver Pay. About an average of 24 million smartphone users visit the Naver app on their handsets every day, according to the company.