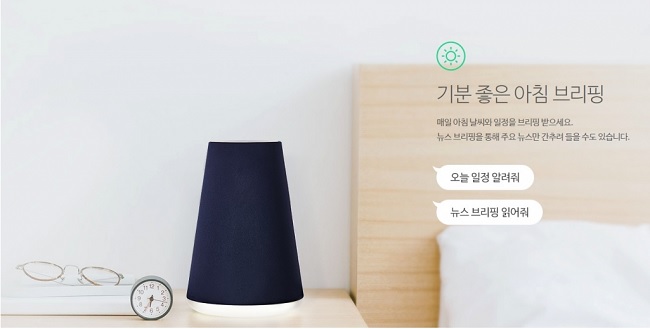 The device’s mechanical finish is more than modest. The tall gray cylinder enveloped with black cloth doesn’t give an impression of pompousness but one of neatness and stability. (Image:NAVER)

SEOUL, Aug. 22 (Korea Bizwire) — Wave, a ‘smart’ speaker that is the first AI gadget developed by South Korean web giant Naver, has received much attention for the massive investment the company made in its development, having chosen artificial Intelligence as the key technology of the next generation.

The main functions of Wave include strengths such as spontaneous recognition and processing of voice commands, whereas its poor compatibility with IoT (Internet of Things) devices and difficulty processing complicated voice commands have been identified as low points.

The device’s mechanical finish is more than modest. The tall gray cylinder enveloped with black cloth doesn’t give an impression of pompousness but one of neatness and stability.

Once fully charged, the battery can last up to five hours when only used for playing music. However, it does require proprietary recharging adapters and cables.

Wave is manufactured by Quanta Computer, which is well known for producing Apple products.

Naver is touting the device’s voice secretary as its best feature.

Wave can give spontaneous answers to questions like “What are the rankings of the latest movies?”, “Where is a restaurant with delicious food in the vicinity of Hong-ik Univ. Station? and “Tell me how to get to the nearest convenience store.”

Compared with other AI speakers rolled out by domestic mobile communication companies such as SK Telecom and KT (Korea Telecom), Wave can make the best use of Naver’s enormous Korean database accumulated from winning the overwhelming market share in the domestic internet search market.

“Wave is the best among the AI speakers in the market when it comes to the recognition and processing of Korean voice commands,” said a Naver official.

The device’s compatibility with IoT has been seen as a weakness, as the only IoT device that it can be connected with is a smart bulb, while Eco, the Amazon-made AI speaker currently ranked number one in the U.S. market, is compatible with a variety of appliances.

Moreover, even in processing voice commands in Korean, Wave cannot be expected to put out answers to questions made of longer and more complicated sentences other than those of short sentences Naver presented as examples.

Given Wave’s limitations, it is likely that some potential users would feel no need to use the voice secretary when a question can be easily dealt with using a smart phone.

In fact, most early adopters say that they have ended up using simple functions such as playing music, setting an alarm and news-reading.

Since Wave is currently being offered as a beta product before its official launch, improvements are expected to be forthcoming.