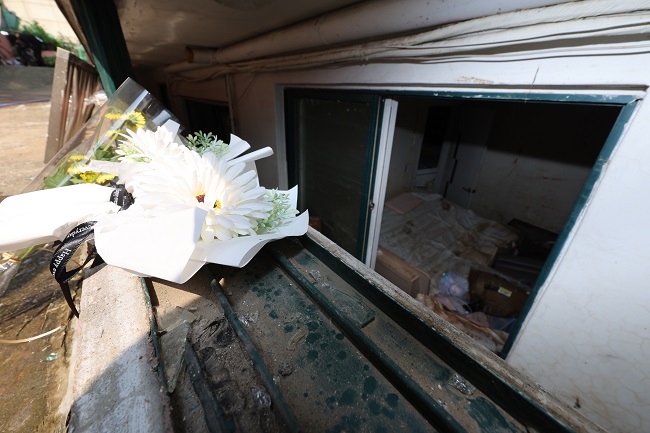 Flowers are placed at a ground level window of a semi-basement apartment in Seoul’s Gwanak Ward on Aug. 12, 2022, where three family members were stranded and later found dead after heavy rainfall began pounding the capital city and parts of central South Korea on Aug. 8. (Yonhap)

Lee Yoo-bin from the Seoul National University Graduate School of Public Health conducted an Impact of Event Scale–Revised (IES-R) study of 699 people over 18 years of age who had experienced natural disasters like typhoons, rain showers, earthquakes and fire to determine whether their post-traumatic stress varied based on income and education levels.

The study showed that households that make less than 2 million won (US$1,520) per month were exposed to higher stress levels in the earlier stages compared to those in the mid- or high-income tier.

The gap in the stress levels between these two groups stayed more or less constant as time progressed.

At the end of the first year of the study in 2017, the stress score among the low-income tier stood at 27.75 points, in contrast to the 17.19 points among mid and high-income earners.

The scores range from 0 to 88 points. Normally, a group is diagnosed with PTSD if the score exceeds 25 points. A group that scores between 18 and 24 points is diagnosed with partial post-traumatic stress disorder (PTSD).

“The negative impact that natural disasters have on mental health are more clearly observed among the disadvantaged in society,” Lee said.

“It shows the need for the sufficient provision of public health and medical services as well as economic support in order to reduce and prevent PTSD.”