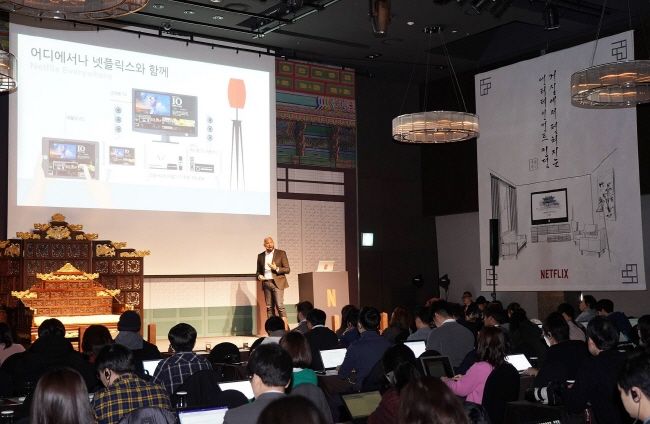 Netflix, which started as a video rental firm in 1997, currently has over 189 million paid memberships in over 190 countries enjoying both original and licensed TV series, documentaries and feature films across a wide variety of genres and languages.

“We spent US$8 billion last year to create original content,” Andy Law, director of product design, told reporters in Seoul, adding that Netflix is committed to providing more original shows. He did not disclose the budget allocated for this endeavor.

Netflix said it will produce more programs in languages other than English as part of efforts to fund high-quality foreign-language content and provide them to audiences around the world.

“We want to create content that can be intuitionally understood by the global audience, beyond language barriers,” Kim Min-young, a Netflix representative, said.

“Kingdom,” Netflix’s first original Korean drama, to be streamed Friday, will have subtitles in 27 languages and be dubbed into 12 languages, with more to be added.

The six-episode zombie mystery thriller is set in Joseon, the last Korean dynasty, and was written by famed Korean screenwriter Kim Eun-hee, the author of the popular 2016 TV series “Signal.”

“Netflix’s content crosses borders, showing our positive side,” Kim said, citing other licensed foreign-language programs such as “Elite” from Spain and the British series “Bodyguard.”

Kim said storytelling is important to reach global a audience and that Netflix plans to create more quality local content on the back of “hallyu,” or the Korean Wave.

“Sixty percent (of our membership) is from outside of the U.S.,” said Nigel Baptiste, director of partner engagement at Netflix, adding that Asia, and South Korea in particular, is a very important market.

He also said that the company is currently engaged in various partnerships, working with tech giants such as Samsung Electronics Co. to improve technology and convenience.

A Netflix button is available on smart TVs to improve accessibility for consumers so they can find their favorite shows quickly.