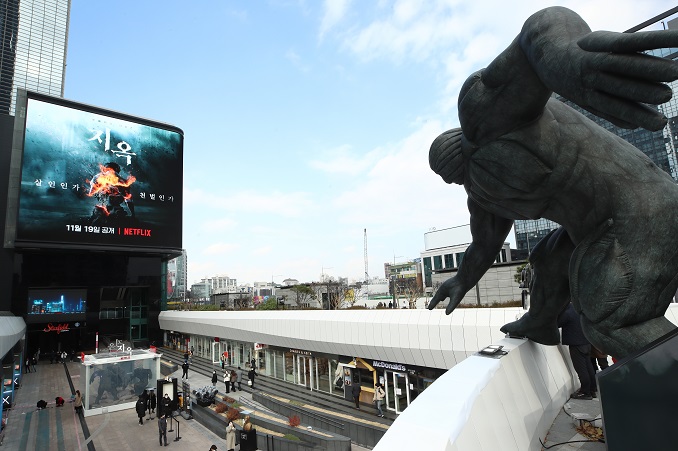 A replica of a monster featured in the Netflix Korean fantasy horror “Hellbound” is set up at the series’ experience zone at COEX in southern Seoul on Nov. 24, 2021. The TV series grabbed the global No. 1 spot on Netflix’s popular TV show rankings on Nov. 20, just one day after its release. (Yonhap)

SEOUL, Nov. 29 (Korea Bizwire) — Netflix has maintained is position as a leader in the South Korean streaming market despite Disney+’s recent launch.

655,609 iOS and Android users in South Korea were simultaneously using Netflix and Disney+ as of the third week of November, according to data tracker IGAWorks.

Netflix, on the other hand, saw its number of daily active users rise from 3,055,517 people to 3,955,517 over the same period, up by more than 29 percent. Netflix’s newly released Korean fantasy horror series “Hellbound” seems to have led the rising popularity.

Disney+ is facing controversy over poor subtitle translations and other issues that have been widely discussed on South Korean social media.