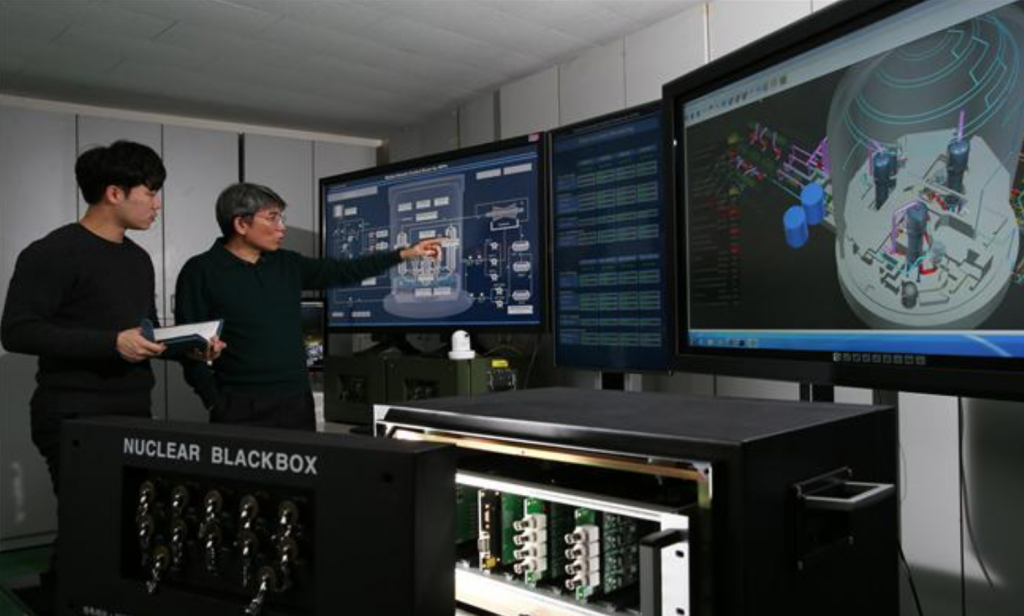 The control system, which is a mini-control center built inside a vehicle, can remotely monitor and administer eight reactors simultaneously. (image: Korea Atomic Energy Research Institute)

DAEJEON, March 9 (Korea Bizwire) – In a bid to better prepare for unforeseen accidents at nuclear power plants in South Korea, the Korea Atomic Energy Research Institute said Wednesday that it is developing a Nuclear Blackbox to monitor in real time nuclear reactors from a safer distance, and a vehicle-based remote control system to oversee and control on-site functions based on information collected by the Blackbox.

The Blackbox is both waterproof and explosion-proof (from hydrogen gas explosions), and can withstand an external temperature of 80 degrees Celsius, 1.2 kilograys of radiation, and peak ground acceleration of 10g. Once detached from its power source, the box can run for 72 hours with its built-in battery.

Officials said that the device transmits, via satellite communications, data including temperature, pressure, hydrogen concentrations, radiation levels, reactor water levels, and CCTV information to the remote control system – which can receive the information from a distance of up to 30 kilometers away.

The control system, which is a mini-control center built inside a vehicle, can monitor and administer eight reactors simultaneously.

Both devices are currently prototypes, and are expected for commercial application by 2025. By 2022, the Blackbox will be further improved to survive external temperature of 200 degrees Celsius and 5 kilograys of radiation, according to KAERI.

“The key point is for the devices to withstand extreme environmental conditions like high temperatures and radiation levels, and our research will focus on meeting that demand,” said an official. “We’ll try to make their commercialization possible by early 2022, for use at nuclear power plants in Korea, and possibly to be exported abroad.”

South Korea has 25 nuclear reactors that generate roughly 30 percent of the electricity for the entire country. With additional construction underway, the number is expected to rise to 33 in the near future.

KAERI’s research was sparked by the 2011 Fukushima disaster, during which officials lost command of the main control center from a power outage, and subsequently failed to prevent the meltdown of some of the reactors.