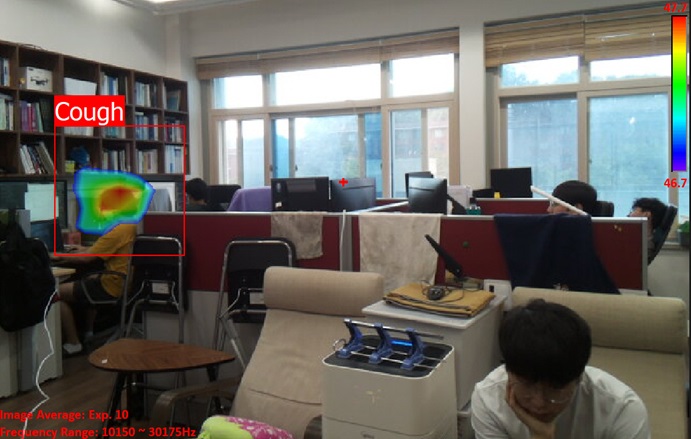 The new device can recognize the sound of coughing on a real-time basis. (image: KAIST)

DAEJEON, Aug. 4 (Korea Bizwire) — A new camera has been developed to indicate the location of people who cough or sneeze as an image by recognizing the sound of coughing on a real-time basis, the South Korea’s top engineering and technology university said Monday.

The camera is expected to contribute to preventing the spread of COVID-19 as the main symptoms of the infectious disease include fever and coughing.

A new camera can visualize the sound of coughing and the location of the people who cough or sneeze by applying a deep learning-based cough recognition model into a sound camera, according to a research team at the Korea Advanced Institute of Science & Technology (KAIST).

The new device can recognize the sound of coughing on a real-time basis.

This model is programmed to output a binary signal – 1 is coughing and 0 is other – by using one second-long sounds as an input signal.

The cough recognition model was trained using an open sound audio data set, with other data sets being used as background noise for data augmentation.

After mixing the background noise into the audio set at a proportion of 15 to 75 percent and adjusting the sound by 0.25 to 1.0 times to factor for various distances, the data set turned out to have an accuracy of 87.4 percent.

If the cough recognition model is implemented in a sound camera that consists of a sound-collecting microphone array and a camera module, a contour and a label is indicated in the position where the sound of coughing is generated.

Even in a severe noise environment, the device can discern the sound of coughing, as well as determining not only the location of those who cough but also the frequency of coughing.

“This camera can be used to sense the prevalence of infectious disease in public areas where people are congested.” said Park Yong-hwa, professor at KAIST who led the research team.