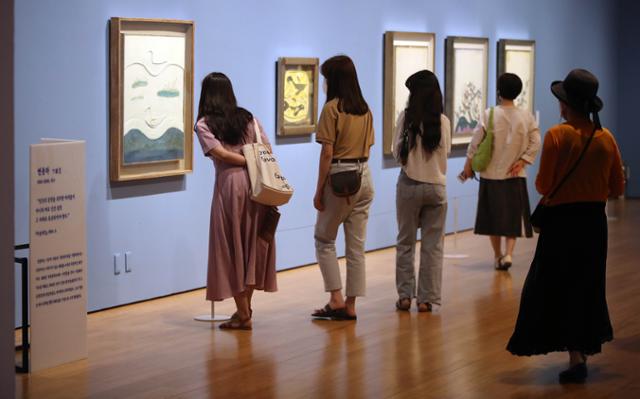 Women look at paintings at a gallery in Daegu, 300 kilometers southeast of Seoul, on July 1, 2021, when the country eased social distancing rules against COVID-19 and allowed private gatherings of up to eight people, up from four. (Yonhap)

The daily caseload marks the largest since Jan. 7 when it reached 869. The latest figure is sharply up from 762 cases a day earlier.

The daily new cases in the greater Seoul area have accounted for over 80 percent of the total for a week, according to health authorities.

As outdoor activities have soared and the new infections from the highly contagious Delta variants have been on the increase in recent days, chances are very high that the new virus cases will further spike, they added.

As of 9 p.m., the health authorities and local governments had reported 731 confirmed new cases across the country, up 15 from the same time the previous day.

Health experts said under the loosened distancing measures, the highly contagious delta variant could spread fast in the greater Seoul area, and warned that daily new virus cases may rise to 1,000 next week.

To curb the further spread of the delta variant, the quarantine measures for arrivals from overseas should be bolstered, they added.

The country earlier announced its plan to allow arrivals who have been vaccinated abroad to enter South Korea without going through self-isolation starting July.

Prime Minister Kim Boo-kyum stressed that even people who have been inoculated should wear masks in crowded outdoor settings and venues, urging citizens not to hold private gatherings for the time being.

The health authorities predicted the virus situation would get worse down the road, as the reproduction rate stood at 1.2 across the country, indicating that a COVID-19 patient infects more than one person.

The surge in the new virus infections in the wider Seoul area, home to half of the country’s 51.34 million population, forced health authorities to delay the enforcement of the eased distancing measures by one week till July 7. 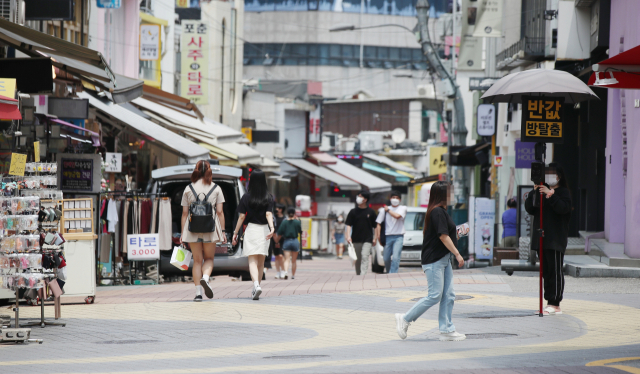 A street in Hongdae, Seoul, frequented by youths, is relatively quiet amid the spread of the delta variant on July 1, 2021 (Yonhap)

After reviewing the trend of new virus cases, they will discuss next week whether to implement the loosened rule.

Under the new rules, the ban on private gatherings of five or more people and the 10 p.m. curfew on restaurants had been expected to be lifted.

But other areas have been put under the eased social distancing rules.

Jeong Eun-kyeong, the head of the KDCA, said if the current spread of the new virus is not curbed, the country could face another wave of the COVID-19 pandemic.

The situation in the greater Seoul area is very dangerous and crucial, as more young people could get together under relaxed distancing rules, she warned.

The spiking virus cases came as the country has been carrying out the vaccination program since late February.

The health authorities said they will start vaccinating high school seniors and faculty members on July 19 and 50-somethings on July 26.

Under the new vaccination campaign, 6.3 million people are expected to be newly vaccinated this month, bringing the number of people vaccinated with their first shots past 20 million next month.

Of the newly confirmed domestic cases, 81 percent came from the wider Seoul area, with 337 from the capital, 260 from Gyeonggi Province and 22 from Incheon, 40 kilometers west of Seoul.

The number of patients in serious or critical condition came to 145, up one from the previous day.

The total number of people released from quarantine after making full recoveries was 148,319, up 295 from a day earlier.